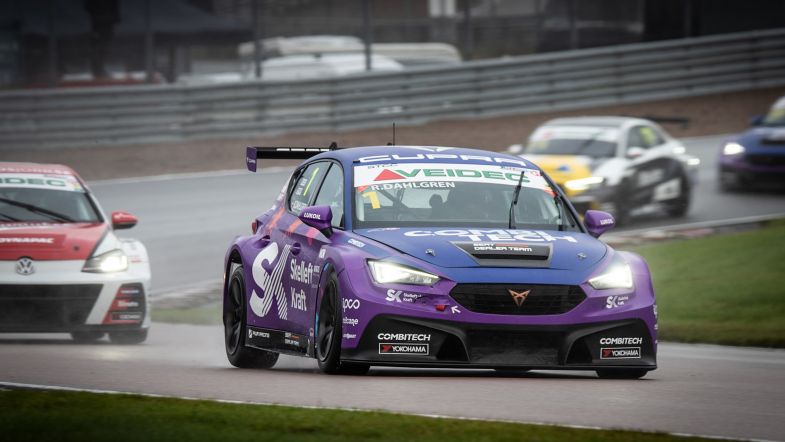 The track had dried out for the second race and PWR Racing driver Dahlgren managed to claim the lead after going side-by-side with title rival Tobias Brink through the first corner.

There was drama behind as Lestrup Racing Team driver Oliver Söderström lost the rear end of his Volkswagen at the exit of Turn 1, hitting both Daniel Haglöf and Andreas Ahlberg, starting a chain reaction.

There was confusion as the safety car turned off its lights, but remained on track, with the field narrowly avoiding crashing into the back of it.

When the field was released, Huff put hard pressure on Brink Motorsport driver Brink, making the move stick on lap seven to take the lead with an impressive move on the outside ahead of the hairpin.

Daniel Haglöf was next up to put pressure on Brink, only for Brink’s team-mate Hannes Morin to hit the Cupra driver.

Morin received a five-second penalty for the incident.

Mikaela Åhlin-Kottulinsky was next up to challenge Brink who was clearly struggling for pace. The Cupra driver went on the inside of Brink in the final corner of lap 13, sending the Audi driver into a half-spin.

Åhlin-Kottulinsky took third place but was given a five-second penalty for the incident, dropping her to finish fourth.

Kågered Racing driver Ahlberg had just caught the trio after the incident, but out braked himself going into the first corner. The Volkswagen driver went over the gravel trap and then into the pits to retire with a puncture.

Haglöf caught Morin in the fight for sixth position but made a mistake that dropped him to eighth position, thus securing the reversed grid pole position for the final race.

Dahlgren won the race by close to six seconds ahead of Huff, with Brink in third thanks to the penalty for Åhlin-Kottulinsky.

STCC newcomer Kevin Engman impressed once again, finishing seventh after starting from the back of the grid.

Albin Wärnelöv and Emil Persson rounded off the top ten.

Dahlgren is sharing the championship lead with Huff on 184 points. Brink is third on 178 points ahead of the final race that starts at 15:35 CEST.