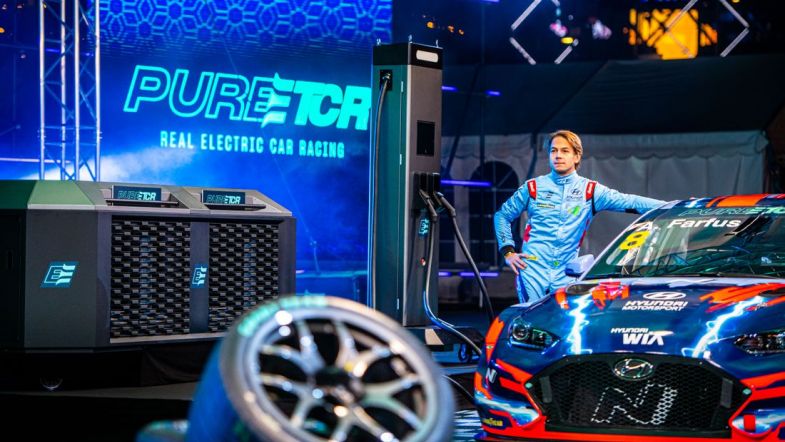 Hyundai’s PURE ETCR test and development driver Augusto Farfus says that he is “literally learning new things” about driving as he gets to grips with the new Hyundai Veloster N ETCR.

The all-electric touring car series will make its competitive debut at the Adria circuit next month before a full season in 2021.

Experienced touring car racer Farfus believes that the challenge of unlocking the most out of the new electric cars is as big as any he has had in his career to date, stating that he has almost has to “re-learn” even the basics.

“The first laps I did in the car was a very weird feeling,” Farfus said.

“You don’t really get the feeling of the speed, but as a driver you are always trying to bring the car to its limit.

“The car, when you brake you don’t have the engine braking like a normal ICE car. It is a very unique way of braking and for me this is a big challenge.

“I did one slow lap and then straight onto a fast lap, and I literally locked all four tyres at the first corner because the way you apply the brakes is so different to an ICE (Internal Combustion Engine) car.

“I was ready to just smash the brake pedal. So, actually, I am literally learning new things about how to drive a car because the way you drive a PURE ETCR car is completely different to the ICE.”

Farfus also went on to explain that getting the most out of the Goodyear tyres will add another dimension to the competition, with greater torque and increased braking zones depending on how much power the car is running.

The Brazilian believes that the best team next year will not necessarily have the best overall package, but will be the one which is able to ‘optimise the tyre management’ and find the right compromise on set-up.

He added: “For me, when you get on the power, the characteristics of the car change a lot, it gets a lot faster.

“So, if you are on a street circuit where you have the big walls next to you, you have to learn how to brake and find your way around. The torque that we have, combined with the power and the braking, it is a big, big challenge.

“As for the tyre development, it’s an ongoing process at the moment, but we still don’t really know how to manage the tyres yet.

“It will be very difficult to nail every single aspect on the performance of the car in the first season and the team which is able to do the best average set-up will be the most successful next year.”