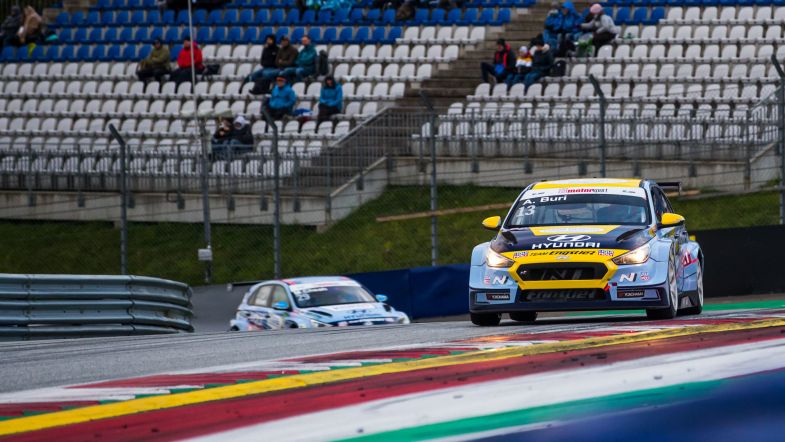 Antti Buri made amends for his race one penalty by taking victory in the second TCR Germany race of the Red Bull Ring weekend.

The Team Engstler Hyundai i30 N TCR driver was stripped of his on-the-road win on Saturday following a 30-second penalty for speeding under yellow flag conditions late in the race, but came out on top on Sunday, beating Harald Proczyk by nearly four seconds.

Fugel led the way off the start from René Kircher’s Volkswagen Golf GTI TCR, but the latter came under attack from Buri, Proczyk and TV commentator Patrick Simon.

Buri quickly latched onto the back of Fugel for the lead and looked set to make a move on the Honda driver before the Safety Car was deployed to recover the stopped Hyundai i30 N TCR of Mitchell Cheah who pulled off the road approaching Turn 6.

Buri maintained his pressure on Fugel at the restart and on the second racing lap back, he made a superb move around the outside of Turn 1 to seize the advantage.

Fugel, seemingly struggling for pace, then fell into the clutches of Sandro Soubek’s Audi RS 3 LMS for second.

But Soubek was too eager to make ground on the Honda in front, and ran wide at Turn 4, momentarily going through the gravel trap on exit.

While Buri escaped up the road, Fugel was now under attack from Proczyk’s Hyundai, with the reigning champion in the middle of a three-car battle with Simon right behind.

Proczyk eventually got by Fugel with just over four minutes remaining with another impressive move around the outside of the penultimate corner.

Try as he might, Proczyk could not bridge the gap to Buri, who claimed the win by 3.771s at the flag.

Off the podium behind Fugel came Soubek and Simon, with Albert Legutko securing another strong top six finish.

The next round of the TCR Germany season takes place at the Lausitzring on the final weekend of October.