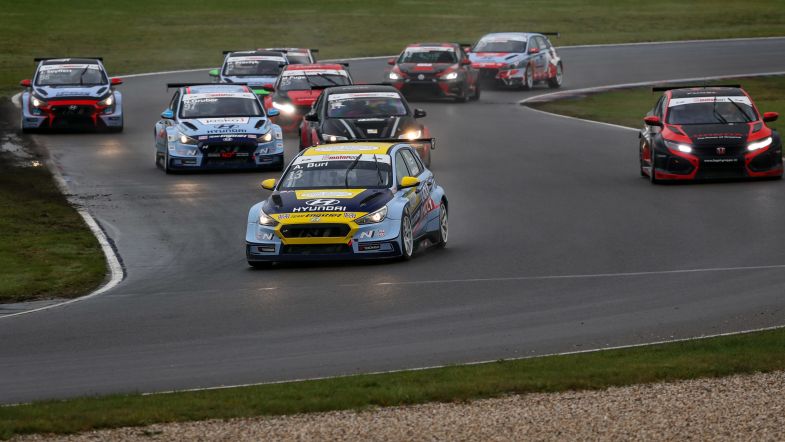 The Hyundai Team Engstler driver set a time of 1:31.474 in a red-flagged second segment of qualifying, beating Fugel Sport interloper Tiago Monteiro by just eight-hundredths of a second.

Dominik Fugel will start third on the grid and is joined on the second row by current points leader Harald Proczyk (HP Racing International).

Practice pacesetter Luca Engstler had been in contention for pole, but failed to set a time in Q2 after encountering an unspecified technical problem at the end of Q1. He lines up 10th on the grid for tomorrow’s opening race.

The German regular posted a time of 1:31.715 to go over seven-tenths quicker than fellow WTCR driver Monteiro, with the latter’s Honda team-mate Marcel Fugel third.

Monteiro set two improvements as the session wore on, despite losing one lap-time to track limits abuse at Turn 9, getting to within one-tenth of a second from Engstler.

Monteiro was not the only one to get pinged by track limit warnings, as title rivals Antti Buri and Dominik Fugel also lost times.

Buri got himself into the mix with the third fastest time but was quickly shuffled down the order as the likes of Fugel, René Kircher and Harald Proczyk improved their times.

Buri ended up seventh fastest in Q1, while Fugel’s last minute effort gave him the quickest time of 1:31.703, a mere 12-thousandths of a second faster than Engstler.

Kircher was fourth ahead of Jan Seyffert and Buri, while the early pace-setter Marcel Fugel was eighth.

Monteiro was quick out of the blocks at the start of Q2, going two-hundredths of a second quicker than Buri, who improved on his second lap to post the fastest time.

Proczyk initially went third fastest but was beaten by Fugel but one-thousandth of a second. Proczyk’s team-mate Seyffert was up next ahead of Dziugas Tovilavicius and Marcel Fugel.

Kircher was eighth and will start Race from pole, while Nico Gruber and Engstler rounded out the top ten.

Race 1 at Oschersleben is scheduled to take place on Saturday at 11:00 CET, with Race 2 scheduled for Sunday at 12:25 CET.