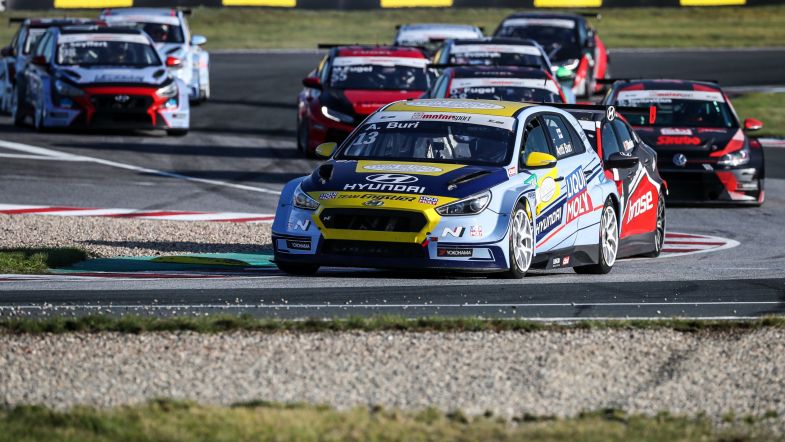 Hyundai Team Engstler’s Antti Buri moved into the lead of the TCR Germany championship standings ahead of the final race of the season following a dominant lights-to-flag victory at Oschersleben.

The Finn, driving a Hyundai i30 N TCR, started from pole and was untroubled on his way to this fourth win of the year.

Guest entrant Tiago Monteiro finished second ahead of Fugel Sport team-mate Dominik Fugel, but Fugel picked up the points for second to boost his own title challenge.

Erstwhile points leader Harald Proczyk could only manage sixth in his HP Racing International Hyundai i30 N TCR, having lost valuable ground at the start.

Pole-sitter Buri got a decent start off the line and just edged Honda ADAC Sachsen’s Tiago Monteiro into the first corner.

Dominik Fugel held third place at the start while Proczyk fell behind the fast-starting Dziugas Tovilavicius’s Volkswagen which jumped a full row on the grid to run fourth.

Team Engstler Hyundai’s VIP driver – and 2018 series runner-up – Luca Engstler’s weekend continued to unravel on the opening lap as the German retired at Turn 10 which brought out the safety car.

Buri maintained his lead at the restart with guest-entrant Monteiro holding second ahead of Fugel and Tovilavicius.

Proczyk, having lost two places off the line, looked frustrated as he struggled to find a way past Marcel Fugel’s Honda ADAC Sachsen for fifth. The 2018 TCR Germany champion locked his front brakes several times and could not find a sufficient gap to make a move.

Out front, Monteiro wasn’t allowing Buri to escape, with the Finn’s lead being trimmed from over a second to just six-tenths of a second heading into the final three minutes of the race.

As for Proczyk, rather than putting more pressure on Marcel Fugel in front of him, the Austrian had to defend heavily from his own HP Racing International team-mate Jan Seyffert.

Proczyk, with very little pace in the closing stages, just held onto sixth place at the finish.

Buri, however, had no such issues and came home 1.808s clear of Monteiro, with Dominik Fugel finishing third on the road but claiming points for second.

René Kircher was eighth, with Albert Legutko’s Honda completing the finishers in ninth.

In the standings, Buri now sits on 233 points and holds a seven-point lead over Proczyk heading into Sunday’s final race of the season. Dominik Fugel is just eight points further adrift in third and still in contention.