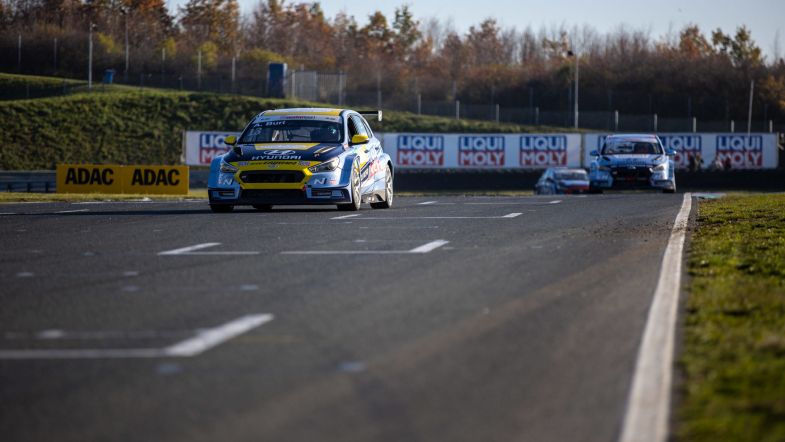 Antti Buri clinched the TCR Germany title with a third-place finish in the final race of the season at Oschersleben, as Dominik Fugel claimed his fourth win of the year.

The points battle ebbed and flowed throughout the 19-lap encounter, with both Fugel and Buri slipping in and out of championship-winning contention.

Fugel dominated the race once past his brother Marcel and survived two safety car periods to beat Harald Proczyk – who was involved in a startline accident with guest star Tiago Monteiro – by 1.299s.

Buri, with third, made amends for a close title miss to Max Hesse in 2019, as the final place on the podium was enough to take the championship.

Off the line, there was immediate drama as Fugel’s Honda ADAC Sachsen team-mate Tiago Monteiro came together with Proczyk’s HP Racing International Hyundai and speared across the track into the concrete wall.

Monteiro had got a much better start than Proczyk and Fugel, and tried to squeeze his way between the pair but got pincered. Proczyk continued apparently without damage in ninth, one place ahead of Buri’s Team Engstler Hyundai which had slid off the track at Turn 1 on the opening lap.

Marcel Fugel led away from the safety car restart, having beaten pole-sitter René Kircher off the line, and allowed his brother Dominik into the lead after the latter forced his way past Kircher at Turn 9.

Playing an effective rear-gunner role, Marcel Fugel heavily defended his second place from Kircher, which enabled Dominik Fugel to open up a five-second margin in just one lap.

Proczyk and Buri’s charge back up the field was proving effective, with the Austrian pulling off a number of assertive passes to make his way up to fifth place ahead of HP Racing International team-mate Jan Seyffert.

Buri meanwhile, having momentarily slipped out of championship contention with his poor start, found his way past his Hyundai Team Engstler team-mate Nico Gruber with 15 minutes of the half an hour race left.

The Finn then moved back into the lead of the points by overtaking Seyffert for sixth before following Proczyk past Kircher.

Proczyk got his elbows out throughout the race, with a forceful move on Gruber at Turn 14, for which he recieved and black and white warning flag before executing a similar move on Kircher.

Both Buri and Proczyk were elevated two more positions with 10 minutes remaining as Engstler collected Marcel Fugel at the final corner, sending Engstler out of the race and Fugel tumbling down the order.

A final twist to the race then came with just six minutes remaining as Proczyk’s team-mate Seyffert went off track, bringing out the safety car for the second time and forcing a three-lap dash to the flag.

Dominik Fugel’s restart was aided considerably as Proczyk nearly went off the circuit at the penultimate corner as the field prepared to build back up to racing speed.

Ultimately, the final laps were more sedate than the 27 minutes which preceded them as Fugel headed Proczyk to the line by just over one second, but it was Buri who clinched the title in third.

Off the podium, Gruber finished fourth, with Kircher fifth and Albert Legutko the last remaining finisher in sixth.