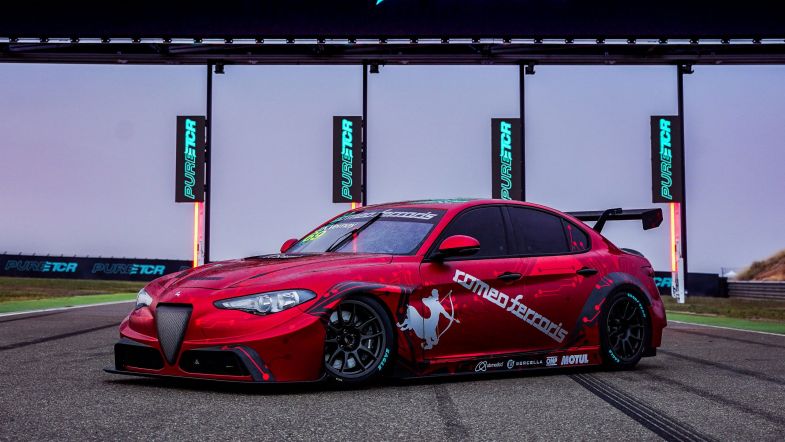 The Romeo Ferraris team has revealed the brand-new Alfa Romeo Giulia ETCR car that it is set to campaign in the all-electric touring car series in 2021.

The new car was launched in the paddock at MotorLand Aragón on Saturday evening, with team boss Michela Cerruti and driver Jean-Karl Vernay on hand to pull the covers.

“We are very happy to be launching this new project, stemming from the hard work initiated one year ago, when we decided to embark on this new journey that marks our debut in the world of electric car racing,” said Cerruti.

The car sports a striking “Romeo Ferraris red” livery, and is a private project by the Italian outfit with naming endorsement from Alfa Romeo.

Vernay, who has already been confirmed as the team’s driver for the inaugural PURE ETCR season next year, told TouringCarTimes that Saturday’s launch marked the very first time even he had seen the car.

“This is the first time I see the car, because they wanted it to be a surprise,” said the Frenchman. “They can be super proud of their job – what they did is amazing. They don’t have the same resources as other manufacturers, and the car is absolutely outstanding. The livery is really beautiful. It’s been a lot of work from the entire company and lot of work still to do, but I’m very proud of them.”

The Giulia is the third ETCR car to be revealed, joining the Cupra e-Racer and the Hyundai Veloster N ETCR.

WSC president Marcello Lotti, whose company regulates the technical platform of ETCR as well as the WTCR, said:

“It’s always a thrilling moment when a new race car breaks cover, but the unveiling of the Giulia ETCR by Romeo Ferraris at Motorland Aragón is something very special, because it associates a famous name and its glorious history of successes in touring cars with this innovative project that is ETCR.

“So far, we had only seen drawings and renderings, but to look at the car in the ‘flesh’, here in the paddock gives me the shiver, because it’s absolutely gorgeous. Now I can’t wait to see it running and I’m confident that with the expertise of the Romeo Ferraris staff it will be competitive from the very beginning.”

The Giulia ETCR has yet to hit the track, with the battery installation process still to be completed at Williams Advanced Engineering in the UK.

When asked by TouringCarTimes when the car could actually be expected to run for the first time, Cerruti replied:

“I think it will be winter. A lot depends on the battery installation, which has to be done at Williams in the UK. Of course, the current situation worldwide is a bit difficult and we need to stay there for a week or even more, so at this time it’s pretty difficult to do that. But I think that at the very beginning of 2021, by the end of January, we can see this car running.”