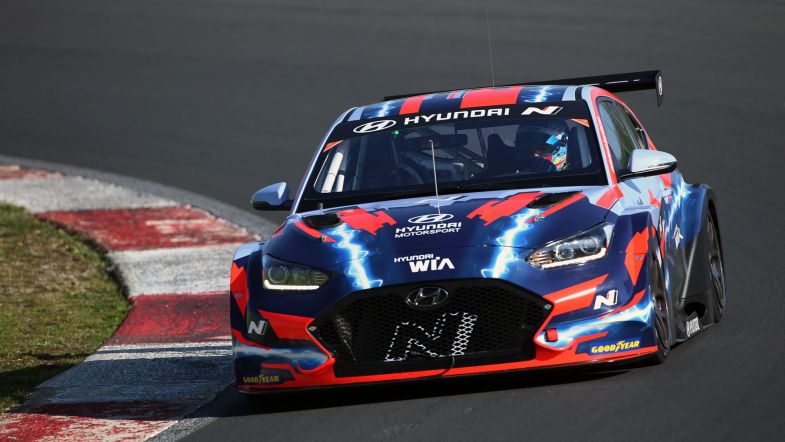 Hyundai Motorsport has confirmed its four-car line-up for the inaugural PURE ETCR season, with Augusto Farfus, Jean-Karl Vernay, Tom Chilton and John Filippi getting behind the wheel of the Hyundai Veloster N ETCR.

“Racing in PURE ETCR is the natural next step for the project, and in the four drivers we have for the season ahead I believe we have a line-up in which everyone is capable of racing for victory on every weekend,” said Hyundai Motorsport team principal Andrea Adamo.

“So far we have risen to, and beaten, every challenge that has presented itself in the process of building and developing the car. Competition is just the latest of these. I look forward to the start of the racing season and seeing our four drivers in action.”

Farfus joined the programme as its official test driver earlier this year and has got plenty of touring car experience, finishing third overall in the 2009 WTCC and second in the 2013 DTM season.

“It’s great to be racing again as part of the Hyundai Motorsport team and with the Hyundai Veloster N ETCR,” said Farfus.

“I’ve been fortunate enough to have done a lot of testing with the car. Through that process it’s been exciting to see – and feel – the progress of both the Hyundai Motorsport team and the technical suppliers working with the series to bring the project to where it is now.”

Vernay is also functioning as official test driver for the team and will also drive a Hyundai Elantra N TCR for Team Engstler in the WTCR this season.

“This is going to be a very busy season for me as a Hyundai Motorsport Customer Racing driver – but I couldn’t be happier about it,” said Vernay.

“The Hyundai Veloster N ETCR and the car I will drive in FIA WTCR are very different, as are the series themselves, but I don’t think this is a problem. Perhaps it will even help – for example in the short PURE ETCR Battles you will have to be very decisive in your overtaking moves, and hopefully this skill will help me in WTCR as well.”

Chilton is going to have a busy season as well, racing in the British Touring Car Championship for Ciceley Motorsport alongside his ETCR programme.

“Electric-powered racing is a new challenge for me, but as part of the Hyundai Motorsport line-up for PURE ETCR I think I am in the best place to race for victories,” said Chilton.

“I’ve worked with John before, but this will be my first time sharing a garage with Augusto and Jean-Karl. They’re both very successful in TCR and touring cars in general, so I’m sure they’ll be strong competitors and a good benchmark to compare myself to throughout the season.”

Filippi drove a Hyundai i30 N TCR for Target Competition in the TCR Europe series last year, finishing second overall with one victory and a total of three podium finishes.

“Even though I raced Hyundai TCR designs last season, a move to PURE ETCR with the Hyundai Veloster N ETCR is still a big change for me,” said Filippi.

“I know it will be a challenge, but it’s something I’m looking forward to. My first priority is to get used to the car in pre-season testing. Everything will be new; new car, new team and an entirely new format for the race weekends.”