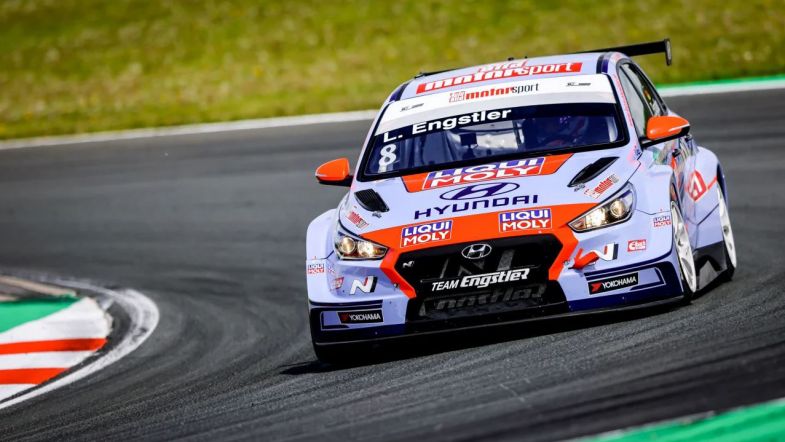 Pole sitter Martin Andersen, driving a Hyundai i30 N TCR of Team Engstler, was slow off the blocks at the start, with team-mate Engstler taking the lead ahead of the Fugel brothers.

Eric Scalvini, driving a Cupra Leon Competición of Wimmer Werk Motorsport, made his way up through the pack, climbing up to sixth place on lap ten and joined group in pursuit of third place Fugel.

The Italian, however, was ordered to exchange places with NordPass’ Jonas Karklys (Hyundai i30 N TCR) by the stewards, after tagging the Lithuanian earlier.

Andersen then made a mistake, braked too late and had to go wide to avoid crashing into Fugel’s back, with Gruber taking advantage of the situation to overtake for fourth position.

Scalvini overtook Karklys again on lap 12, working his way up to Andersen, and overtaking the Danish driver for fifth place two laps later.

Team Oettinger’s René Kircher spiced up the last laps after recovering from a drive-through penalty for jumping the start, climbing up to eleventh place with just two minutes to go.

Marcel Fugel caught his brother Dominik during the final couple of laps to launch an attack for second place, but was unable to get past.

Luca Engstler took a comfortable victory ahead of Dominik and Marcel Fugel. Scalvini overtook Gruber on the last lap to climb up to fourth position.

Engstler has claimed the points lead with 33 points, followed by Dominik Fugel on 26 and Marcel Fugel on 21 points.

The field returns to action on Sunday morning with the qualifying session for Race 2, scheduled for 09:40 CEST.