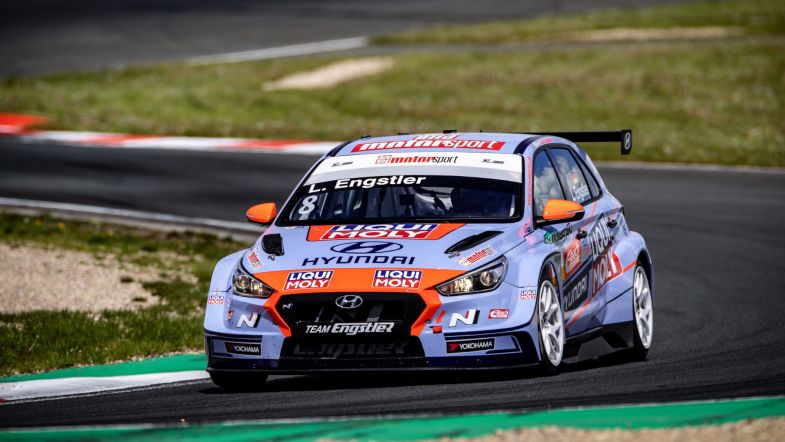 Luca Engstler makes it two out of two wins at Oschersleben

Luca Engstler claimed victory in both of the TCR Germany championship season opener races at Oschersleben, joined on the podium by Dominik Fugel and Nico Gruber in Race 2.

The Hyundai driver started from pole position and headed the field from lights to flag.

Danish Team Engstler team-mate driver Martin Andersen meanwhile made a slow start, just as in the first, from third on the grid, dropping to fifth on the opening lap.

The safety car was called out on the first lap as Günter Benninger spun and briefly got stuck in the gravel at Turn 3.

The Cupra driver was however able to make his way back on track and the race resumed after just one lap behind the safety car.

Andersen fought hard with Honda driver Marcel Fugel for fourth position as the race resumed. The battle resulted in contact between the two in the final corner of the lap and a drive through penalty for the Danish Hyundai driver. Marcel Fugel made a half-spin and dropped down to seventh.

Fugel Sport driver Dominik Fugel caught Engstler’s team-mate Gruber in the fight for second place on the final couple of laps. Fugel made a daring pass on the outside of the Hasseröder corner to claim second place on the last lap after some contact.

Engstler heads the standings on 68 points, 18 more than Dominik Fugel and 29 more than Gruber.

The next TCR Germany race takes place at the Red Bull Ring on June 11-13.