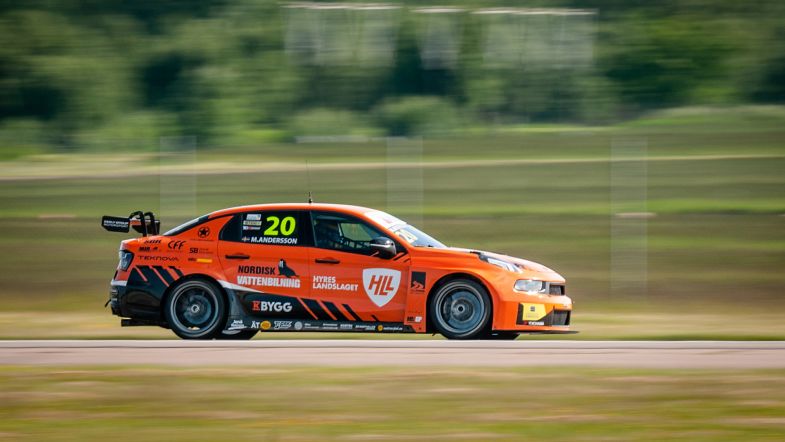 Mattias Andersson claimed his first victory with his Lynk & Co 03 TCR in the third and final STCC TCR Scandinavia race of the weekend at Ljungbyhed.

The MA:GP driver started third but made a lightning start to pass both Kågered Racing drivers Hugo Nerman and Andreas Ahlberg into the first corner to claim a lead he was not to lose.

There was drama behind Andersson meanwhile, with Lestrup Racing Team drivers Robin Knutsson and Oliver Söderström both stalling on the grid. Söderström was able to get going quickly while Knutsson was struck from behind by Brink Motorsport driver Hannes Morin.

Morin was airborne briefly and had to retire with a damaged front suspension and a puncture, as did Knutsson.

Mikaela Åhlin-Kottulinsky was making strong progress during the first part of the race and passed Nerman for third position at turn one on lap three.

The PWR Racing driver then caught Nerman’s Kågered Racing team-mate Ahlberg for second on lap 12. Åhlin-Kottulinsky made her move into turn one and was alongside the Volkswagen driver who suddenly turned into the Cupra driver.

The contact resulted in a spin and retirement due to suspension damage for Åhlin-Kottulinsky while Ahlberg dropped from second to finish ninth.

Söderström clawed back through the field after his lap one stall and got past Audi driver Isac Aronsson on lap five after some contact that resulted in a warning for the Volkswagen driver. The Lestrup Racing Team driver finished fourth.

Andersson won the race by four tenths of a second over Nerman who claimed his best-ever STCC result with second place.

Dahlgren finished third to extend his lead to 60 points, 17 more than Söderström and Brink who share third place in the standings. Åhlin-Kottulinsky is fourth on 41 points.

Hyundai driver Albin Wärnelöv failed to start the race following technical issues that saw him retire from the second race.

The next STCC race takes place at Skellefteå on June 18-19.