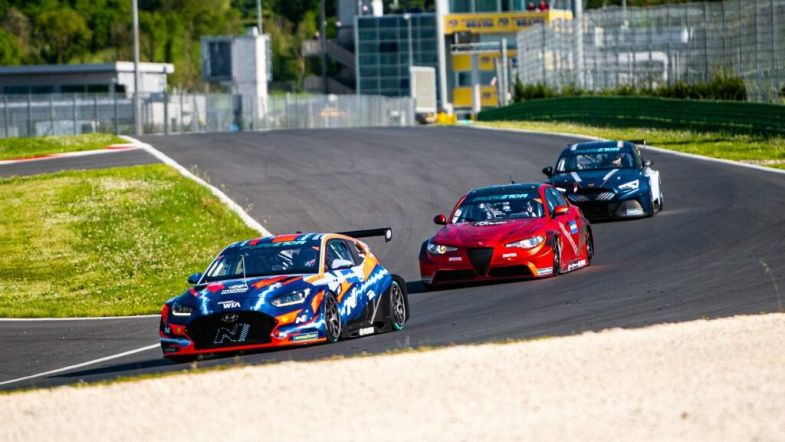 The organisers of PURE ETCR have confirmed a twelve-driver full season entry for the inaugural season for the new electric touring car series ahead of the season opener this weekend at Vallelunga.

Hyundai and Cupra will be represented by the Veloster N ETCR and the Cupra e-Racer, with the Romeo Ferraris developed Alfa Romeo Giulia completing the line-up for the first year full season entry.

Hyundai will run Tom Chilton, Augusto Farfus, Jean-Karl Vernay and John Filippi in its two cars, with Mikel Azcona, Jordi Gené, Mattias Ekström and Dániel Nagy in the two Cupras – the latter being the final driver confirmed on the grid for this season in the Zengő Motorsport-run cars.

Stefano Coletti, Oliver Webb, Luca Filippi and Rodrigo Baptista will then race the Alfa Romeo, which is being run by Romeo Ferraris in alliance with M1RA.

“We are at the start of something ground-breaking right now; an all-electric touring car series that will create a platform on which the biggest automotive brands in the world can showcase their latest products,” series director Xavier Gavory said.

“A platform like this needs top-level drivers to demonstrate the immense potential of the cars to their absolute maximum, and I’m delighted to say we have exactly that.

“Not only do we have touring car heroes like Mattias Ekström and Jean-Karl Vernay, but young drivers like Rodrigo Baptista and Dániel Nagy trying to challenge them in a completely new form of racing.

“Dániel’s addition brings another young driver with huge potential into the series and means that race fans in Hungary will have a home hero to cheer for when we visit the Hungaroring in August.”

The series will run a format similar to that seen in rallycross, with a series of short, sharp ‘battles’ taking place each weekend.

Each team will run a pair of cars shared between two drivers, with a draw on Friday evening being used to split the field into two pools featuring six drivers – with those drivers then split into smaller groups for round one on Saturday.

This weekend, round one will see three drivers do battle on track around a shorter 1.75km layout at Vallelunga which determines which battle the drivers then go into in round two later the same day.

Round three on Sunday will then run to a time-trial format with drivers heading out on track alone to set a quick time, which will determine the starting positions for the finals. They feature all six cars going door-to-door around a longer 3.2km circuit.

The driver scoring the most points across the weekend will then be named as the event winner.