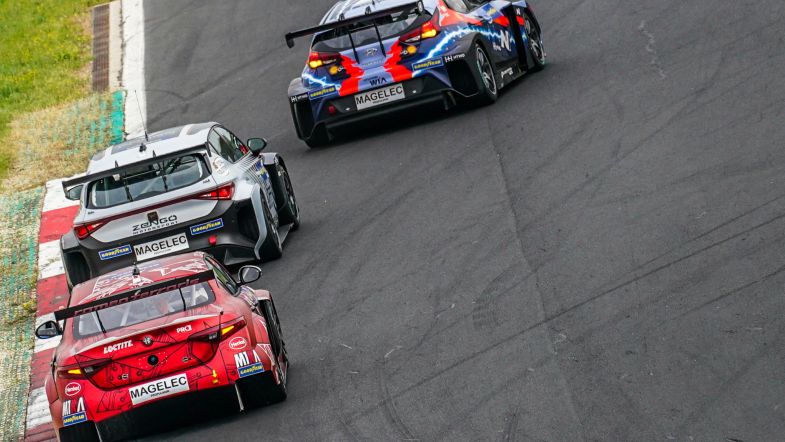 Augusto Farfus had set the pace in Sunday’s PURE ETCR Round 3, which granted him pole position. The Brazilian driver spun out of the lead with a left rear tyre issue, which triggered a retirement.

When asked if his previous GT experience has been precious in driving the all-electric rear-wheel drive Hyundai Veloster N ETCR, the Brazilian said to TouringCarTimes:

“What I’ve been able to bring to the project is my experience in developing cars, working in a team and such like, but to be honest everything is so different compared to anything else that you can’t say it works like a GT car or whatever.

“It’s like comparing sushi and pizza, they are both delicious and edible, but also completely different. It’s the same in this case, such a new and beautiful experience.”

ETCR cars are used in both 300 KW and 500 KW configurations, and the Hyundai driver admits that at maximum power it is a huge challenge to drive these cars:

“It’s so difficult to drive with 500 KW because of the huge power. You have a very small operating window in these cars, that’s why we have seen so many mistakes.

“You brake 5 meters too late and that’s goodbye, you won’t be able to stop it. That puts drivers under pressure and you have very little free practice. We were able to test a lot here at Vallelunga, but wait until we go to other tracks, it’s going to be an unbelievable challenge.”

Having a spec powertrain is a limiting factor, but also enriches the challenge, according to Farfus:

“All cars have the same powertrain, so it makes development even harder, because you have a dominant factor in the car that you can’t modify. You have cars that as similar as they are, they’re also completely different. For instance, Williams have a standard traction control which is the same for all cars, but if it works on a model it doesn’t mean it will work for the others as well, so it’s an incredibly difficult job for them as well.”

The Brazilian feels the driving style required to push ETCR cars to the limit puts extra focus on the driver and it is a lot of fun:

“It’s very fun because it’s hard. The car is a different beast compared to yesterday, and you go out for the time trials not knowing how the track is and you can’t even test it on the out lap as you have to save the tyres.

“It’s very challenging because you get into that and you don’t know what’s going to happen, and it has 900 Nm of torque, which is the same as a Bugatti Veyron, and there is no GT car like that.”

Despite being the designated driver to develop the Veloster N TCR, Farfus believes he is not as experienced at the wheel of ETCR machinery as a lot of running has been lost due to the development process:

“It’s not easy and I love it, because we’re all starting from scratch. Jordi (Gené) and I are the ones who have the most mileage on these cars, but at the same time if you count the testing days you see that a lot of the days we did there was very limited running while as we encountered teething problems. So in a way we are all inexperienced.”

The Brazilian also praised the organisation and the start of the ETCR era:

“It’s also great to see that everything is now working as planned, I’m very happy. Taking COVID into account, the lockdown and so on, it’s unbelievable what has been achieved. I am absolutely sure that this championship will take shape in the coming seasons and it will be very popular. It’s going to take a bit of time for people to start watching this sport, but it’s going to be a great show, especially once more manufacturers enter the series.”