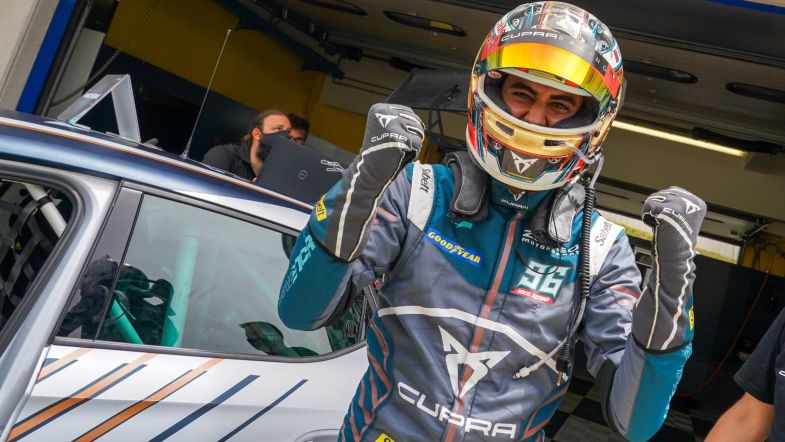 Mikel Azcona won the first PURE ETCR Super Final from the back of the grid as the inaugural weekend of the all-new series continued at Vallelunga.

The Spaniard led a Cupra 1-2, with Jordi Gené finishing a close second ahead of Rodrigo Baptista, who finished third in his Romeo Ferraris Alfa Romeo Giulia.

The rest of the field all suffered issues, with Stefano Coletti going wide exiting Cimini on lap one, his Giulia jumping up and down on the gravel before the Monegasque racer returned to the pits to retire the car.

On the second lap Tom Chilton, who trying to keep the Cupras of Gené and Azcona at bay in second, helped the latter as Azcona overtook his team-mate. Just a few corners later however, the Brit went wide at Cimini and had to slow down with a puncture.

With pole sitter Augusto Farfus now in a comfortable lead, the Brazilian looked to have the race under control, but he spun at Tornantino due to a left rear puncture and also retired the car in the pits, putting Azcona into the lead.

On the last lap Baptista closed in on Gené and actually passed him at the high-speed Curvone, but he then went straight at the turns 6-7-8 complex and had to yield the position back to the Spaniard after a very entertaining battle.

Next up is Super Final B, featuring Mattias Ekström on pole position.