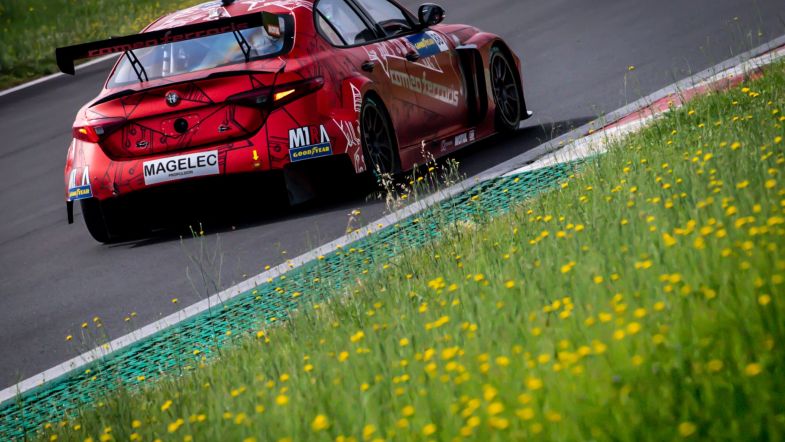 Oliver Webb looked to be on course for a front row start in the PURE ETCR Pool B Super Final, but a huge lock-up at Semaforo left him in fifth, 1.3 seconds off the pace.

The Romeo Ferraris driver finished the race in the same position, despite being promoted to fourth after Cupra’s Mattias Ekström received a penalty.

“The braking point was alright, but I had a bit too much pressure on the pedal and over a bump the car just locked,” said the Brit to TouringCarTimes.

“Once it does, with this weight there’s no coming back. I don’t think I could have gotten pole, but the front row was likely.”

Compared to his usual experience of prototype cars, the Giulia ETCR is a completely different experience:

“It’s very different, you have no engine braking sound, a lot of power, much more than any other electric series out there. The way the car moves is very different, so it’s a learning phase for everyone.

“I think the braking is the biggest challenge, once the car is settled and we accelerate is not bad. We are also on road tyres, compared to everything else which is on slicks, so that’s also a big factor, there’s probably five seconds we’re leaving on the table.”

Webb praised the blistering acceleration of ETCR cars: “It slams you into your seat, every time you touch the throttle the power is always there, so you have the ability to know that if you have a bit of understeer you can use the throttle to your advantage.”

The Brit reckons touring car drivers do have an edge on him, and it will take some mileage to get up to speed and close the gap:

“Almost everyone I’m driving against is a touring car or GT driver and I’m used to LMP1 and LMP2 machinery, so at the moment they have the edge on me and I have to learn to adapt. Of course if you can learn and have a lot of time in the car the driver can make a difference because these cars are difficult to drive, but for this we need testing.

“Energy regeneration is not allowed yet, so we are trying a few things out with the traction control, but for that we need to do some testing to understand it more. We were the last to enter the championship and the latest with the cars, so for us it will take a little bit longer. So far we are very happy.”