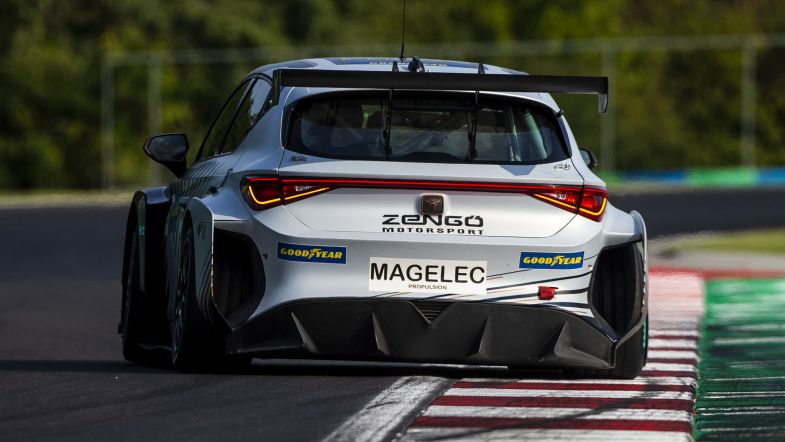 Cupra Zengo X Motorsport driver Mikel Azcona drove a dominant race in Sunday’s Super Final B at the Hungaroring to claim his second victory of the season, with he Spaniard also becoming the “King of the Weekend”.

Azcona took the lead at the start followed by Hyundai Motorsport N’s Jean-Karl Vernay, with the Frenchman coming side-by-side with Azcona through the penultimate corner of the lap. This allowed Luca Filippi of Romeo Ferraris to momentarily take the lead.

Azcona recovered the lead the main straight, with Vernay then launching an attack on him at Turn 1 and the two clashed. The Spaniard prevailed but took a big amount of damage.

Nagy tried to attack Filippi on the main straight on lap three, tagging the Alfa Romeo driver, with both spinning. The duo managed to recover and continue the race.

Filippi’s rear left tyre exploded on the main straight as he started the fourth lap, with the Italian crawling his way back to the pits.

Azcona claimed his second victory of the season in the Super Final B as Vernay’s push dwindled as the race progressed, with Nagy taking a very damaged e-Racer to the finishing line in third place.

“I’m really happy and couldn’t be more happy,” said Azcona after the race. “I cannot wait for France because I feel very strong.

“I really want to be the champion, I know it’s very difficult. I think that if we continue with this pace in France we can do it. I know it’s going to be difficult but I like the challenge,” added Azcona.

Mattias Ekström leads the championship on 273 points, 29 ahead of Vernay and 35 over Azcona, with the final round of the PURE ETCR taking place at the French track of Pau Arnos on October 15-17.