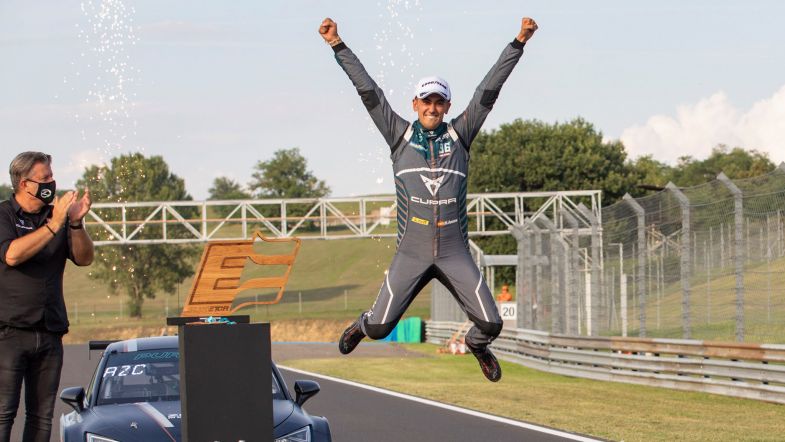 Mikel Azcona: “This result gives me confidence for France”

Cupra Zengo X Motorsport’s Mikel Azcona had a strong weekend in the fourth round of the PURE ETCR season at the Hungaroring to be crowned King of the Weekend for the second time, relaunching his chances for the title.

The Spaniard claimed pole position, the victory in his Super Finale and ultimately, the weekend crown.

Azcona started the Super Final B from pole position but Hyundai Motorsport’s N Jean-Karl Vernay posed a strong challenge in the initial stages of the race, coming side-by-side with the Spaniard on several occasions.

“Jean-Karl was very aggressive in the first corners but, for the second one, I had the inside and I thought it was my position but, at the last moment, I saw him going to the inside so I gave him space to not have contact because the Super Final is a long race with five laps,” explained the Cupra driver.

“After that, I prepared the exit of the straight, where I could manage the power-up, so I took again the first position.”

Vernay didn’t give up and continued attacking the Cupra driver, so Azcona opted for building a gap: “After that, I could feel him on my rear bumper, so I was a bit nervous on the following corners, because I felt him very strong but I decided to use a bit of the power up to build some distance so I could relax for a little bit. After that I could manage pretty well and the car was very good.”

Azcona’s efforts allowed him to take the victory in the Super Final B, becoming the King of the Weekend, the first driver to do so twice in the PURE ETCR.

“I feel really, really happy to be the King of the Weekend here at the Hungaroring, home for my team Zengo Motorsport. After a really tough weekend in Denmark it’s good to be back again and gives me a lot of confidence for the final race in France,” added the Spaniard.

“I’m very proud of the team and have to say thank you to Mattias (Ekström), to Jordi (Gené) and to Dániel (Nagy) as we worked very hard during the weekend to have a perfect car.

Azcona now lies third in the championship heading for the season finale at Pau Arnos, 35 points behind Ekström and six behind Vernay.

“I felt quite good in the Super Final with the car and also on the time trial lap, so I can’t wait to go to France,” concluded Azcona.