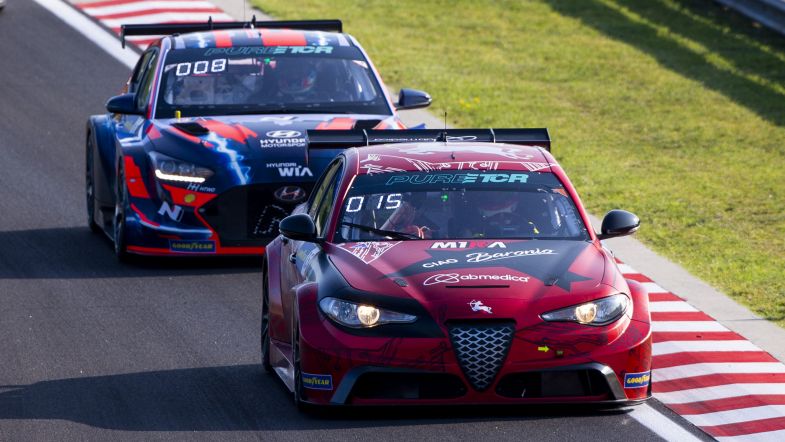 Philipp Eng: “We had potential for more”

Romeo Ferraris driver Philipp Eng completed another solid weekend in his second appearance in the PURE ETCR, finishing the Hungaroring round in second place. But the Austrian believes a better result could have been in store for him.

A mistake during his qualifying lap prevented him from taking the pole position for the Super Final A.

“The car was very strong in the time trial,” the Austrian explained. “Obviously it was a bit of a disadvantage to be out first as nobody knew what the track conditions would be like and you can underestimate the grip, so I out braked myself.”

The qualifying trouble didn’t stop Eng from taking the lead at the start of the Super Final A, with Cupra’s Mattias Ekström taking a cautious approach and the Romeo Ferraris driver claimed the victory.

Eng finished the weekend in second place behind Mikel Azcona.

“I’m very proud to be sitting here again in P2 after the weekend,” added the Austrian. “It was a good weekend, very good team work as well, I think the same as the Cupra guys, all my team-mates and myself worked really hard for this, we had a very open discussion about the team, about the setup, and this is how we push this forward, so I’m very proud of the whole team.

“Obviously, I’d like to be the King of the Weekend but, once my Super Final was done, it was in Mikel’s hands. But I’m still super happy with P2 and the good points we got this weekend.”

The PURE ETCR introduced the power-up feature for the Hungaroring, as well as increasing the power output of the cars to its 500 kW maximum, a decision Eng finds correct.

“I think the weekend in Copenhagen was a bit easier as we didn’t have the power-up, but without trying new things you don’t have progress so from everything in our lives we learn and move forward,” said the Romeo Ferraris driver. “In Formula E I used the power-up like a mad man to break the tow and get away, but in this championship you can’t.

“The racing is a lot of fun, it’s good touring car racing with overtaking and rubbing. It was good fun with Mattias, so I’m super happy,” concluded Eng.