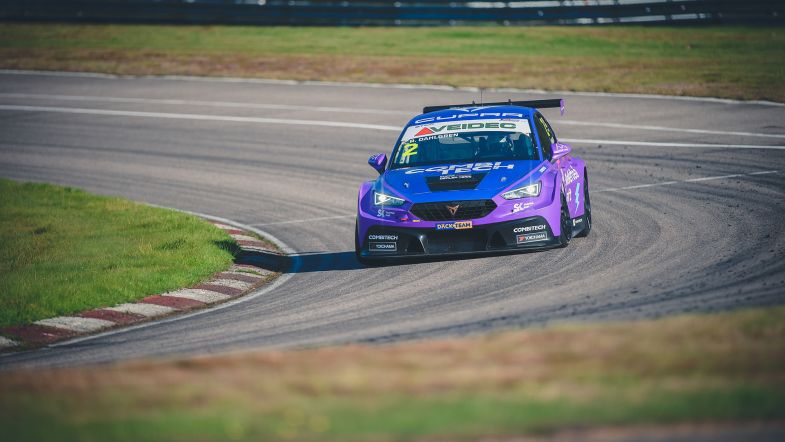 Robert Dahlgren claimed his seventh STCC TCR Scandinavia victory of 2021 in the first race of the weekend at Anderstorp while his PWR Racing team-mate Mikaela Åhlin-Kottulinsky had to fight hard to keep Oliver Söderström behind.

Cupra driver Dahlgren started from pole and controlled the race from lights to flag.

Åhlin-Kottulinsky seemed to have the legs on Lestrup Racing Team driver Söderström during the first part of the race, but the Volkswagen driver closed in towards the end of the race.

Söderström put in an attack on the last lap, getting alongside and past at the exit of the “Mattssons corner”, only for the Cupra driver to re-pass and get back ahead with some contact two corners later.

Kågered Racing driver Hugo Nerman was close behind the duo and waited for an opportunity to get past both, but had to settle for fourth.

Robin Knutsson drove a solid race for Lestrup Racing Team to finish fifth ahead of Tobias Brink, who made his way past Lynk & Co driver Mattias Andersson with two laps left.

Andersson lost another position at the end of the race to Volkswagen driver Mikael Karlsson who started from the back of the grid after his off during qualifying. Karlsson finished seventh and Andersson eighth.

Brink Motorsport driver Jessica Bäckman was involved in a fight for ninth position with Andreas Ahlberg and Albin Wärnelöv, but went off on the last lap, beaching her Audi RS 3 LMS in the gravel after the long straight.

The second race of the weekend starts at 13:30 CEST.