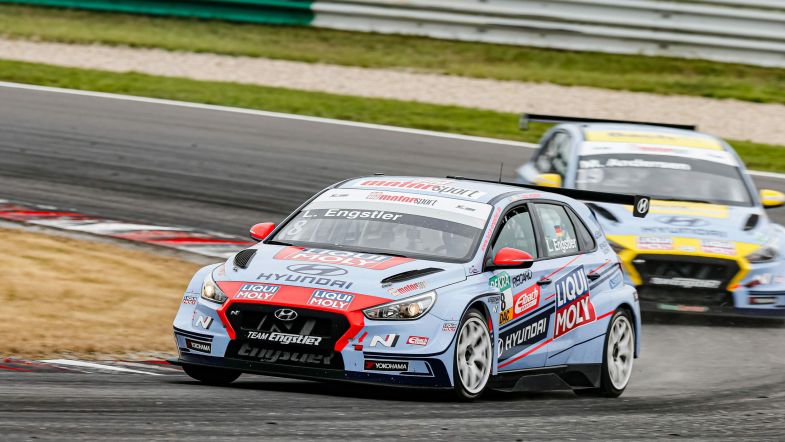 Luca Engstler takes another TCR Germany win at the Lausitzring

Luca Engstler claimed his second TCR Germany victory of the weekend to clinch the double at the Lauasitzring, beating team-mate Martin Andersen.

The Team Engstler Hyundai i30 N TCR drivers dominated the race, which was neutralised early on after an opening lap incident which curtailed the running of three cars, to secure a one-two.

Off the line, polesitter Andersen got a decent getaway but was out-dragged by team-mate and race one winner Engstler on the run into the first corner.

Eric Scalvini also had a good start initially and briefly challenged the pair of i30 N TCRs on the approach to the braking area but the Cupra dropped to sixth by the end of the first lap, with Dominik Fugel third and Nico Gruber fourth.

Further back, there was drama as three cars had their race ended at turn one. Günter Benninger completely missed his braking point for the opening turn and careered into the back of the JP Motorsport Volkswagen Golf of Szymon Ladniak, causing heavy damage to both cars.

Patrick Sing’s Hyundai was also caught up in the incident, which brought out the safety car.

Engstler led off the restart from Andersen while Fugel stayed in touch with the leading pair in his Honda ADAC Sachsen Civic Type-R.

The best battle on track was that between Marcel Fugel, Eric Scalvini, Robin Jahr and Philipp Regensperger for fifth, with the quartet evenly match throughout the race.

Scalvini arguably had the better pace but could not quite find a gap large enough for his Cupra to slide into.

Instead, he found himself under attack from Jahr on the entry to turn one as the latters Hyundai just about managed to stop his car before contact was made.

Meanwhile, Engstler was untroubled en route to his second victory of the weekend – his fourth this season – after a flawless drive. The points leader was never more than half a second clear of team-mate Andersen, but the Dane did not look like mounting a serious challenge to Engstler.

Fugel came home third, just over two second in arrears while Gruber was a lonely fourth in his Engstler Hyundai.

Bheind, Marcel Fugel was fifth ahead of Jahr, who managed to get around Scalvini, while Jonas Karklys eighth.

The next round will take place at Hockenheim next weekend.