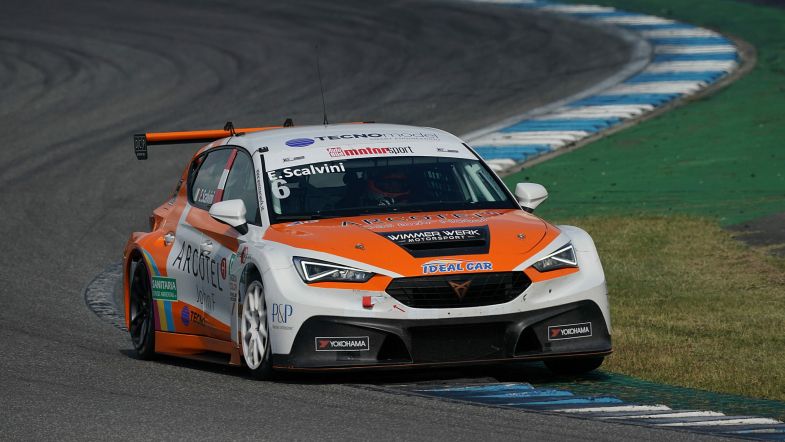 The Italian, driving a Cupra León Competición, set a time of 1:47.779 to beat the Hyundai of current points leader Luca Engstler by almost half a second.

Engstler, who had topped each of Friday’s free practice sessions, had looked like securing the top spot again with his best effort, but Scalvini’s time near the end of the session proved enough.

At the start of qualifying, it was the Honda Civic Type-R of Marcel Fugel which had set the early benchmark, with the German posting a time of 1:48.887.

Fugel had over three-tenths of a second in hand over Jonas Karklys, but both were soon beaten handily by Engstler’s first representative effort, a 1:48.226, some six-tenths quicker.

Philipp Regensperger then impressively jumped up to second in his Opel Astra TCR, some four-tenths off Engstler’s best but late improvements from Team Engstler’s Martin Andersen and then Scalvini made sure Regensperger ended up fourth by the end.

Fugel finished the session fifth quickest, just ahead of the third Engstler Hyundai of Nico Gruber.

Karklys was sixth fastest while Robin Jahr was seventh in another Hyundai.

The Volkswagen Golf GTI of René Kircher had been up the order in fourth midway through the session, but he fell to ninth by the end, just ahead of the lowly Honda ADAC Sachsen Civic Type-R of Dominik Fugel.