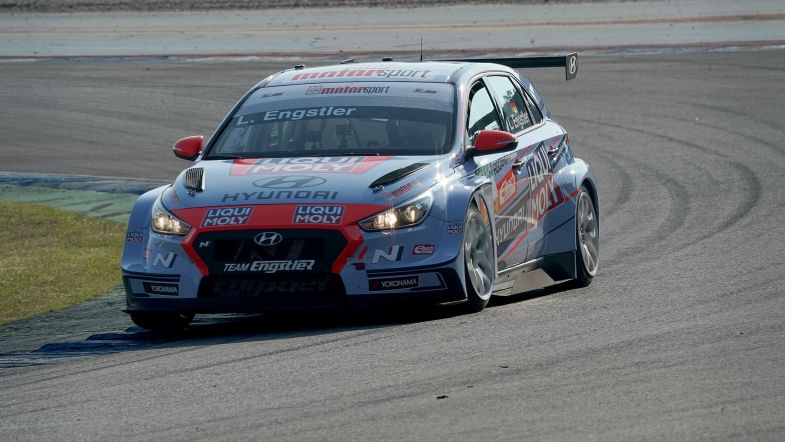 Luca Engstler completed a straight-forward lights to flag victory in the second TCR Germany race of the weekend at Hockenheim.

The Team Engstler Hyundai driver started from pole position and got a solid getaway off the line to head team-mate and fellow front-row starter Martin Andersen.

Race 1 winner Eric Scalvini (Wimmer Werk Motorsport Cupra) got a decent start from sixth on the grid to leap up to fourth by the exit of Turn 1 and subsequently made it past René Kircher’s Volkswagen Golf GTI TCR at Turn 3.

Engstler quickly opened up a handy margin of over a second on Andersen, who fell behind Scalvini at Turn 2 on the second lap, the Italian getting down the inside under braking on the Hyundai before setting off in pursuit of Engstler.

The leader would not be caught though and Engstler was comfortable in front, having built up a lead of three seconds by midway through the race.

That continued to extend before being stabilised at four second by the end, with Scalvini coming home a lonely second.

Fugel and Andersen went wheel-to-wheel on the final lap but clashed wheels approaching the hairpin, which resulted in Fugel getting a puncture and dropping down the order, while Andersen suffered damage and was passed by both Gruber and Jonas Karklys’ Hyundai.

Fugel was not the only Team Fugel Honda to suffer drama, as brother Dominik was also afflicted by misfortune.

Dominik had earlier fought for the back end of the podium in his own ADAC Sachsen Honda but slowed after mid-distance with an issue, eventually bringing it into the pits to retire.

Albert Legutko finished sixth at the flag after a lively battle with Philipp Regensperger. The Honda Civic driver eventually got the better of his Opel opponent, while Robin Jahr was eighth in his Hyundai.

Kircher’s promising grid position did not translate into race pace as he trailed home in ninth, just ahead of Roland Hertner’s Hyundai, who completed the top ten.

Engstler heads the standings on 249 points, Scalvini is second on 186 points and Andersen is third on 151 points.

The next TCR Germany race takes place at the Sachsenring on the weekend of the 8-10th October.