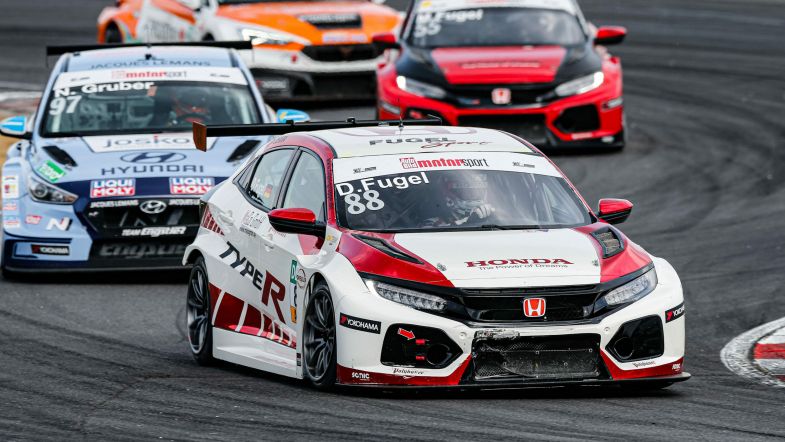 Honda driver Dominik Fugel claimed pole position for the opening TCR Germany race of the weekend at the Sachsenring, as points leader Luca Engstler was fourth.

Having topped the opening practice session on Friday, Dominik set his pole time at the end of the opening runs halfway into the session.

Marcel was the closest challenger early on, some three-tenths adrift of Dominik in another Team Fugel Civic Type-R but could not find sufficient time across the 3.645km circuit to hit the front.

As the cars headed out for their second runs, there were notable improvements from Andersen and Engstler who had languished in the middle of the top ten in the opening stages of qualifying.

Andersen shot up to second with his best effort with two minutes to go, just 0.147s off Fugel’s fastest time, while Engstler made gains in the closing stages to leap up to fourth quickest.

All this movement helped shuffle their Team Engstler team-mate Nico Gruber down to eighth by the end, the Austrian having shown great pace in the middle of the session to lie third momentarily.

But Gruber could not improve after that and fell behind René Kircher’s Volkswagen Golf, Christopher Röhner’s Honda and Philipp Regensperger’s Opel.

Completing the top 10 was the Hyundai of Jonas Karklys in ninth while his brand-mate Patrick Sing was 10th.

Race 1 at the Sachsenring is scheduled to start at 14:10 CET.