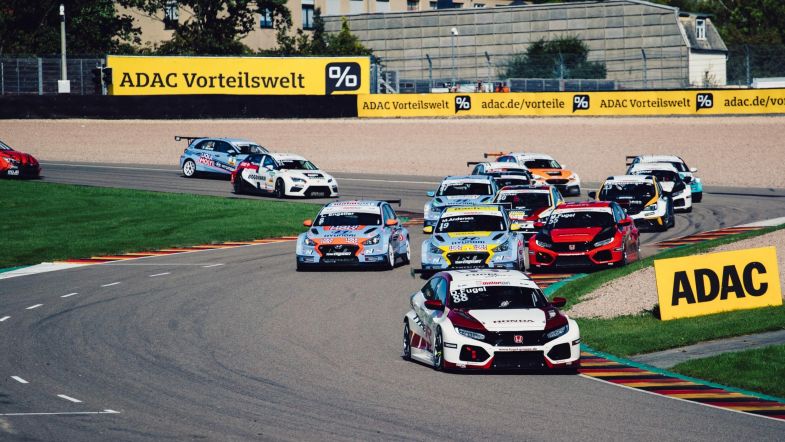 Honda driver Dominik Fugel romped to victory in the opening TCR Germany race of the weekend at the Sachsenring.

Fugel started from pole position and led every single lap en route to his first win of the season as points leader Luca Engstler was severely delayed with a mechanical issue, losing second as a result.

Martin Andersen profited from both his team-mate and Marcel Fugel’s misfortune to inherit second at the finish, with René Kircher completing the podium in third.

Having set the fastest time in qualifying by over a tenth of a second, Dominik Fugel got off the line well to hold a comfortable lead into the first corner, as fellow front-row starter Andersen fended off an attack from Marcel Fugel on the inside of the right-hander.

The pair held each other up on the opening tour which allowed Engstler through into second.

Out in the lead, Dominik Fugel quickly established a lead of over a second by the end of the first lap, which then ballooned to nearly five seconds as the Honda Civic Type-R TCR proved the car to beat all race.

Engstler tried to cling onto the Honda but struggled to pull clear of Marcel Fugel in third. He managed to gap Fugel behind eventually, but was a lonely second by the time he pulled his Team Engstler Hyundai i30 N TCR into the pits with 14 minutes remaining.

His team immediately opened the bonnet of his i30 before sending him back out on track, albeit a lap down.

With Engstler out of the way, Marcel Fugel was elevated to second behind his brother Dominik, but he also hit strife in the closing stages, dropping down the order with an issue. That then allowed Andersen to reclaim his second place, although the Dane had Kircher on his tail in third.

Off the podium, the battle raged for fourth place between the Opel Astra TCR of Philipp Regensperger, Patrick Sing’s Hyundai and the Honda of Christopher Röhner.

The trio fought tooth and nail in the closing laps, with Sing going all the way around the outside of Regensperger at Turn 1, with Röhner also making it past the Opel at the next corner, to claim fifth.

The order stayed that at the finish as Regensperger dropped off the scrap on the final lap.

Robin Jahr brought his Hyundai home seventh, ahead of the similar i30 N TCR of Roland Hertner, while Szymon Ladniak (Cupra) and Jonas Karklys (Hyundai) rounded out the top ten.

Engstler heads the standings on 255 points with Scalvini second on 190 points and Dominik Fugel is third on 178 points.

Race 2 at the Sachsenring is scheduled to take place tomorrow at 11:45 CET.