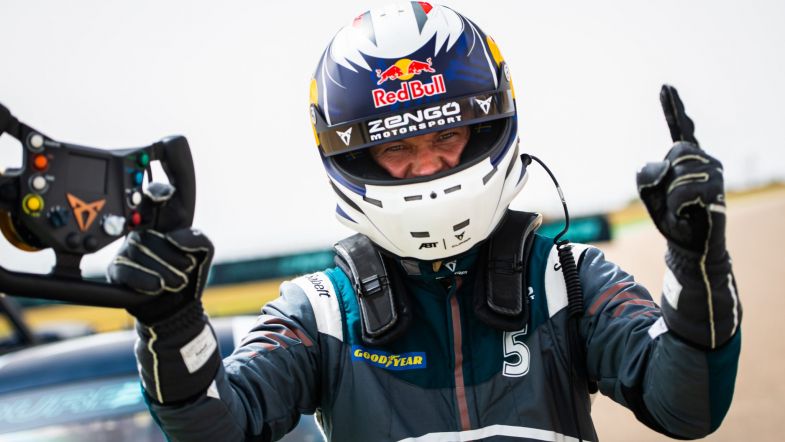 “I must say that I had a very special year, first time here and first full season as a Cupra driver, also the first year in the PURE ETCR,” Ekström told TouringCarTimes.

“I think we have a very competitive car and from the beginning we were very confident that we had good pace.”

The Swede controlled the competition during the last weekend of the season at Pau Arnos, just needing a fifth-place result to clinch the title.

After a start incident with Alfa Romeo by Romeo Ferraris’ Philipp Eng the dream seemed momentarily over, but Ekström managed to return to the track and get the result he needed.

“This weekend we worked through the battles, qualifying and everything was fine. At the start, at Turn 1 it was a pity, and I have nothing more to add to that,” said Ekström.

Ekström was full of praise for his team and manufacturer: “It was a pleasure to work with my team and team-mates Mikel, Jordi and Dani.

“I have enjoyed working with them and also learned a lot. I enjoyed the fight with Jean-Karl over the year, which was very fair and I respect him a lot. He had some technical issues and we always had a good fight.

“This will be a victory and a championship title to remember for a long time and not it’s a matter of whether I’ll be able to come and defend it, but that’s a problem for the coming months.”

Ekström has become champion in almost every category he has participated in, starting his career in the mid-nineties.

“And now this one with Cupra in the electric car… Yes, I’m proud of what I’ve achieved, it’s not easy to win titles as you need guys who are motivated and dedicated. What Cupra has shown to me in terms of dedication from the hardcore motorsport guys at Cupra I think they deserve this more than I do, because they’ve put this project together for years.

“I’ve been here for two years, and I think it’s really impressive because the competition is really strong, so big credit to all the guys who work in the factory and also at Zengo Motorsport for helping and supporting us during the weekend. I’m supper happy that we can celebrate like this.”