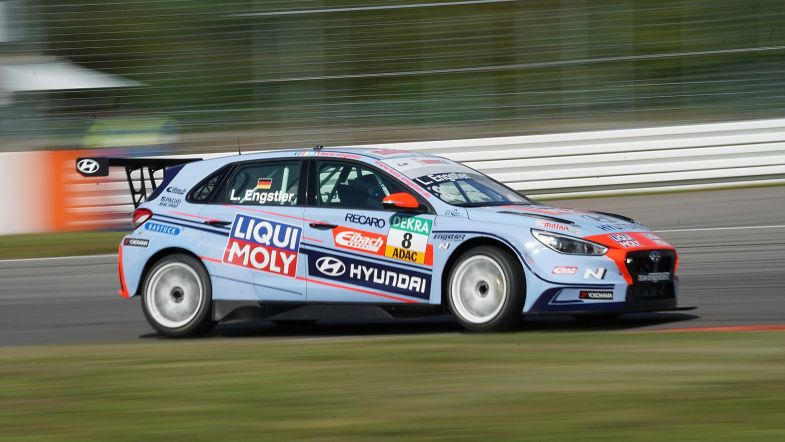 TCR Germany points leader Luca Engstler moved a step closer to picking up his second title with a comfortable victory in the opening race of the weekend at Hockenheim.

From pole position, the Team Engstler Hyundai driver maintained his advantage off the start and led every lap of the race to beat fellow front-row starter Jonas Karklys by 1.886s at the line.

Engstler’s team-mate Martin Andersen completed the podium, as Dominik Fugel lost yet more points in the title race with a somewhat lonely run to fifth.

The control with which Engstler displayed throughout the 18-lap encounter was particularly impressive, with the pole sitter leaping off the line at the start to head Karklys into Turn 1.

Andersen was slightly slower away off the start and had to spend half the opening lap defending his place from the charging Dominik Fugel, who had moved up a place from fifth on the grid.

Although he wasn’t able to disappear into the distance, Engstler did open a healthy le2ad of nearly two seconds over Karklys, which he maintained throughout the race, with the chasing NordPass Hyundai i30 N TCR never really in a position to challenge for the win.

Andersen, meanwhile, had staved off Fugel’s attack for third and the pair remained in these positions until the flag; the top four unchanged come the end.

While the action was consistent at the front, it was further back where things got hectic, as Marcel Fugel, Eric Scalvini, guest entrant Sergio Lopez Bolitin and René Kircher became embroiled in a superb battle for seventh entering the closing stages.

The quartet swapped positions regularly, with Marcel Fugel the only constant in the squabble. This scrap brought Philipp Regensperger’s Opel and the Honda of Albert Legutko into the equation, making it a six-car fight for the lower regions of the top 10.

Lopez Bolotin was hugely impressive on his first TCR Germany appearance in his Cupra León Competición and finished eighth behind Fugel and the other guest entry of Rubén Fernández Gil – who was sixth after a five-second jump-start penalty.

Ultimately, the epic scrap ended in contact on the final lap, as Legutko pincered Kircher and Regensperger, sending the latter head-first into the tyre barrier and leaving Kircher’s Volkswagen with significant damage. Regensperger was uninjured.

Next up for TCR Germany is Qualifying 2 which takes place tomorrow at 09:00 CEST, with the second race scheduled to start at 13:20.