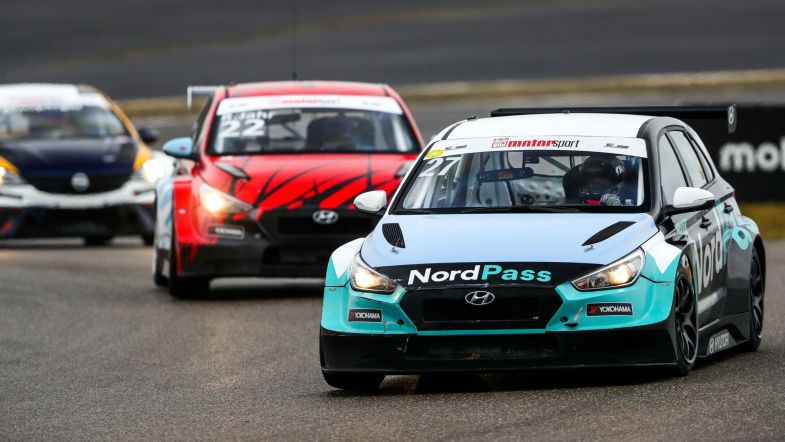 Jonas Karklys produced a sensational final lap overtake of Szymon Ladniak to steal victory in the final TCR Germany race of the year at the Nürburgring.

The final race of the season was significantly delayed from its original start time due to heavy fog around the Nürburgring circuit causing limited visibility throughout the morning. As a result, the race officials elected to push back the programme until conditions improved.

Race 1 winner Andersen started from pole position for the second race in a row and got a decent start off the line initially before being tagged by the Team Fugel Civic Type-R TCR of Marcel Fugel on the opening lap.

Fugel was handed a drive through penalty as a result of this contact and was subsequently shown the black flag for what race officials called “further incidents”.

Andersen’s race seemed to have unravelled as a consequence, with the Dane dropping to the rear of the field before launching a superb comeback which netted him fifth at the finish, which was enough to take second in the final standings, a point ahead of main rival Dominik Fugel.

The main beneficiary of the Fugel/Andersen contact was Ladniak who stormed into the lead from Team Engstler’s Nico Gruber to the tune of six seconds approaching half distance.

The Harder Motorsport driver looked like he would go all the way to secure his maiden series win but the charging Karklys had other ideas.

The NordPass Hyundai driver shot through the field and closed in on Gruber at a superb rate, eventually passing the Austrian with a handful of laps to go.

He then had just under four seconds to make up on Ladniak, but with several fastest laps in the bank, Karklys caught and passed Ladniak exiting turn four on the last lap to snatch his first win.

Ladniak was elated with second, his best result for the Halder Motorsport team this season, with whom he has run a partial campaign.

Gruber completed the podium in third, after struggling for pace in the latter stages.

The best battle was for fourth, as Fugel held on amid huge pressure from Albert Legutko and Andersen. Karklys was the only one to make any progress in this squabble, and Fugel’s valiant efforts ultimately were in vain as Andersen did just enough to take second in the points.