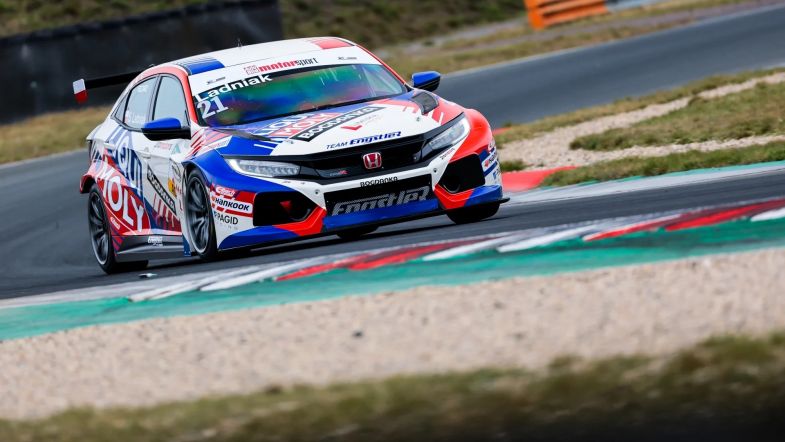 Team Engstler driver Szymon Ladniak enjoyed the ideal start to life in his new Honda Civic Type R after topping the times during two days of official testing ahead of the new TCR Germany season.

The opening day of the two-day test saw the circuit reserved solely for the TCR Germany runners and would be run in the most favourable weather conditions, allowing Ladniak to set what would prove to be the benchmark time as rain then affected the Tuesday sessions

A lap of 1:31.390s ultimately saw the 18-year-old end up three tenths of a second clear of team-mate Martin Andersen, who heads into the 2022 campaign looking to go one better than last season – where he finished second to Luca Engstler.

“They were good sessions,” Ladniak said. “The mixed conditions made it a bit more difficult as we had to keep making changes but for me as a driver, it was definitely helpful to drive in wet conditions.

“Hopefully I can then be at the top of the tableau for the season, that’s why I’ve signed with Team Engstler.”

Jonas Karklys led the Hyundai challenge in third at the wheel of his i30 N TCR ahead of the similar car of Robin Jahr, with Roland Hertner in the third of the Engstler Hondas and Vincent Radermecker’s Holden Astra TCR rounding out the top six.

The Tuesday sessions in the wet would be headed by Andersen, Karklys and Jessica Bäckman; the latter turning her first laps in ROJA Motorsport’s new Hyundai Veloster N TCR.

Irish youngster Reece Barr turned laps in the sister Veloster on Monday and would end up with the eighth quickest time overall.