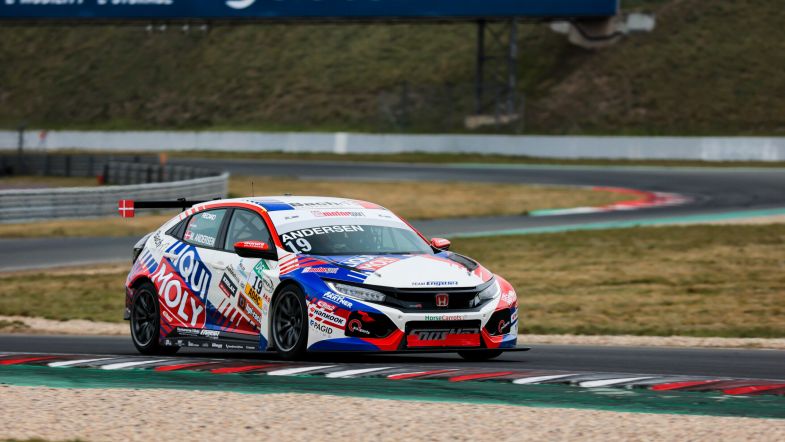 The Dane was quickest in each of the half an hour sessions, beating ROJA Motorsport’s new recruit Jessica Bäckman both times.

Andersen, who finished runner-up in the championship standings last year to Luca Engstler, posted a best time of 1:31.512, to go over half a second quicker than Bäckman in the morning session.

For Bäckman, competing in a full-season campaign for the first time in Germany, it was a positive day aboard the Hyundai Velostar.

She ended up 0.605s adrift of Andersen’s quickest time, but a tenth of a second ahead of ROJA team-mate René Kircher in the older Hyundai i30 N TCR.

In the second session, Andersen was again the fastest with a time of 1:31.916, but this time with a reduced margin over Bäckman who finished within four-tenths of the Honda Civic.

Ladniak emerged third fastest in his Honda, ahead of touring car veteran Vincent Radermecker for Maurer Motorsport in a Holden Astra TCR.

Roland Hertner was fifth quickest for Team Engstler, ahead of Karklys, albeit some 1.4s off the pace.

Gruhn Stahlbau Racing’s Max Gruhn was seventh quickest in the afternoon session, having set the 10th quickest time in the morning.

Albert Legutko finished in the top 10 in both sessions, managing ninth in the morning and eighth in the afternoon, while Patrick Sing – racing a RaceSing Hyundai i30 N TCR – was sixth and ninth respectively.

Qualifying for the opening race of the 2022 TCR Germany season takes place tomorrow morning at 08:45 CET, with Race 1 scheduled to take place later in the day at 14:40 CET.