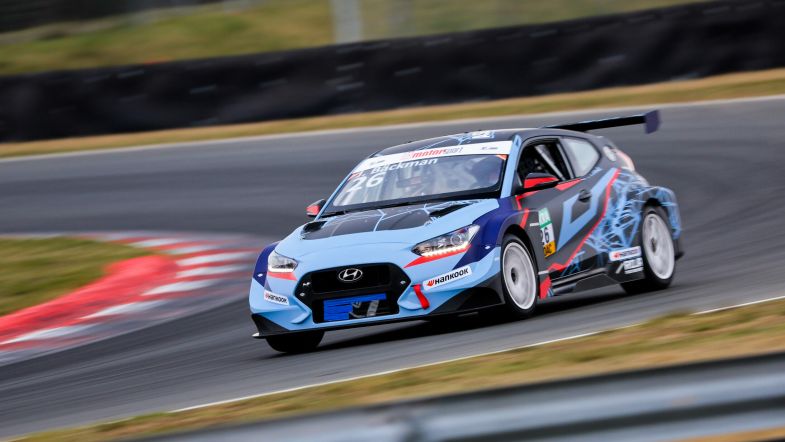 Jessica Bäckman brilliantly fended off a fierce comeback drive from Martin Andersen to take her maiden TCR Germany victory as the season kicked off at Oschersleben.

The Roja Motorsport Hyundai Veloster driver started second on the grid but leapt into the lead off the start following a poor getaway for polesitter Andersen.

Bäckman led the rest of the way, despite having her mirrors full of a recovering Andersen in the closing stages, eventually finishing just half a second at the flag.

Off the line, Andersen bogged down heavily from pole, leaving Bäckman in the clear as the field charged to the first corner. Jonas Karklys moved up to second on the inside while Andersen’s Team Engstler Honda Civic Type-R team-mate Szymon Ladniak bagged third.

Andersen quickly made amends for his slow start and passed Ladniak easily to reclaim third at the chicane towards the end of the fifth lap of 21.

He then closed in on the back of Karklys for second and made his move on lap 10, making the most of a good run out of Turn 7 to get down the inside of the fast chicane.

Meanwhile, Bäckman increased her lead to just over a second as approaching half-distance but soon came under pressure from Andersen.

The gap came down to under half a second, but Bäckman used the tricky confines of the circuit to keep the Danish driver at bay until the finish, with just 0.587s splitting the pair.

Behind, Karklys held onto the final step on the podium by the smallest of margins, just four-hundredths of a second separated the Lithuanian driver and the Roja Motorsport Hyundai i30 N TCR of René Kircher.

Kircher had been the man of the move in the second half of the race, coming out on top in a squabble for fourth place with Ladniak, resolved after Ladniak slide slightly wide at the exit of Turn 1.

In clear air, Kircher closed down Karklys in the final minutes and was just edged out in a drag finish to the line.

Albert Legutko finished a distance sixth in his privately entered Honda Civic, while Roland Hertner was seventh in the third Team Engstler Civic. Patrick Sing was eighth, ahead of Max Gruhn and Kai Rosowski.

Next up for TCR Germany is qualifying two which is scheduled to take place tomorrow morning at 09:20 CET, with Race 2 due to start at 16:05 CET.