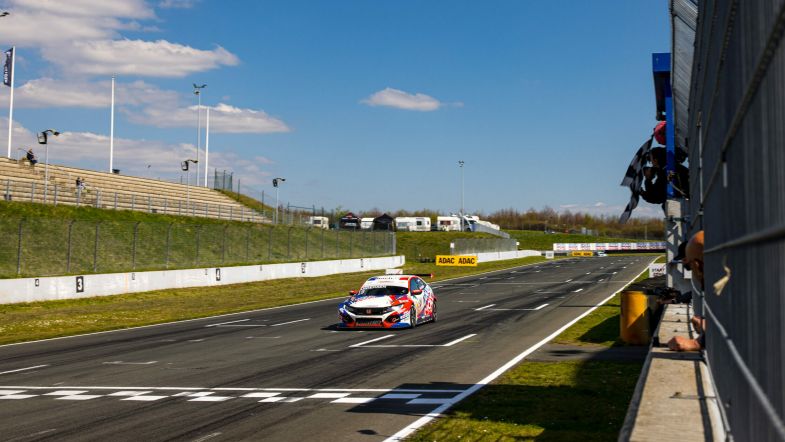 Martin Andersen produced a dominant display from pole position to take victory in the second TCR Germany race of the weekend at Oschersleben.

Unlike in Saturday’s opening encounter, Andersen made a strong getaway at the start and led every lap of the race to head NordPass Hyundai’s Jonas Karklys and ROJA Motorsport’s René Kircher.

Kircher’s team-mate Jessica Bäckman, who won Race 1, fought back from an issue in qualifying to take fifth from the back of the grid in her Hyundai Veloster.

Team Engstler’s Andersen was untroubled as the lights went out and fended off Karklys and Albert Legutko into the first corner.

From then on, Andersen extended his margin over the Lithuanian to nearly three seconds before being pegged back approaching half-distance.

Further back, Bäckman made good progress from 12th on the grid to run seventh early on, while things didn’t go according to plan for team-mate Robin Jahr, who was forced to pit with a front-right puncture.

As the pack settled down, Kircher began to launch an attack on Legutko’s Honda Civic Type-R in front, eventually sneaking past at the entry to turn 12. Szymon Ladniak also challenged Legutko at the first corner, but the Engstler Honda could not get far enough ahead by the apex.

Ladniak’s effort did eventually pay off as he made a move stick on Legutko at turn 12, diving down the inside and securing fourth.

Meanwhile, Bäckman had closed in on the pair of them behind and started hounding Legutko for fifth soon after.

Bäckman, having past Roland Hertner’s Honda around the outside of turn one, was lapping as quickly as the leaders and briefly got alongside Legutko as the pair went side-by-side through the quick chicane.

Legutko held onto the place but his race ended abruptly with nine minutes remaining as an apparent mechanical issue sent his Honda off-track at turn 12.

That brought out the safety car, with a restart only coming in the final minute, leaving just one racing lap to go.

Andersen made a strong restart and quickly put distance between himself and Karklys behind.

Karklys had to defend from Kircher for the duration of the final lap, and claimed second by just over four-tenths of a second.

Eighth was Patrick Sing, while Kai Rosowski and Michael Maurer rounded out the top 10.