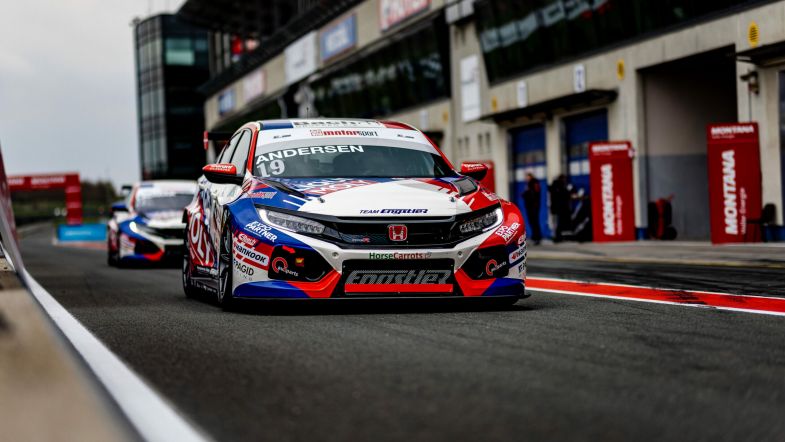 Team Engstler’s Martin Andersen took a second consecutive pole position in the TCR Germany season opener at Oschersleben while Race 1 winner Jessica Bäckman will start from the back of the grid.

Andersen, who finished second in the first race of the weekend on Saturday, set a best time of 1:30.800 to emerge nearly half a second clear of the NordPass Hyundai i30 N TCR of Jonas Karklys.

Meanwhile, it was a disaster for Bäckman, who stopped on track with an apparant mechanical problem in her ROJA Motorsport Hyundai Veloster with around nine minutes of the session remaining, bringing out the red flag.

She will start from 12th on the grid for this afternoon’s race.

Up until that moment, Andersen had been the quickest driver on track, but only by a quarter of a second from team-mate Szymon Ladniak.

When the session resumed with just under seven minutes to go, Andersen improved on his best time to set the new benchmark, 0.427s clear of Karklys, who had jumped into second ahead of Ladniak.

A swathe of improvements meant that ROJA Motorsport’s René Kircher moved into third on the grid, demoting Ladniak to fourth.

Albert Legutko, the early pacesetter in his privateer Honda Civic Type-R, will start fifth on the grid, ahead of Rolan Hertner.

Seventh is Patrick Sing in his private Hyundai i30 N TCR, with Vincent Radermecker putting in a strong performance to qualify eighth in his Holden Astra after a difficult start to his season in Race 1.

Max Guhn was the best of the Audis in ninth, with Robin Jahr rounding out the top 10.