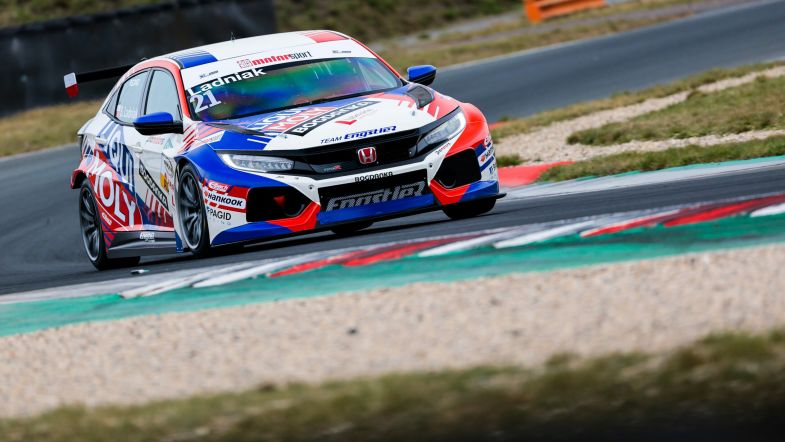 Team Engstler’s Szymon Ladniak topped a drying opening practice for the second TCR Germany round of the season at the Red Bull Ring.

The Honda Civic Type-R driver posted a best time of 1:37.891 to emerged quickest in the 30-minute session, with ROJA Motorsport’s Robin Jahr 0.267 seconds adrift in second.

ROJA team-mates Jessica Bäckman and René Kirhcer occupied the third and fourth positions in a highly competitive opening session of the weekend.

NordPass Hyundai’s Jonas Karklys initially set the pace at the start of the session, setting a time of 1:48.382 as the track was declared wet by race officials.

As was expected, the track conditions improved dramatically throughout and the times quickly plummeted to under the one minute 40 barrier before long.

Points leader coming into the weekend, Martin Andersen had been at the top of the time before the halfway marker, taking his Team Engstler Honda some seven-tenths of a second quicker than Karklys’ subsequent improvement.

Ladniak then went fastest, but it was the Hyundai of Jahr which showed its hand in the second half of the session with a time of 1:41.729, exactly a quarter of a second quicker.

As conditions got better, several drivers took turns as the quickest, with Kircher moving to the top of the pile before being beaten by Jahr once more. Ladniak was the last to go fastest and his time stood until the end.

Bäckman finished third quickest, but the Swede was under investigation for speeding in the pit-lane during the session.

Behind Kircher in fifth was Roland Hertner in the third Team Engstler Honda Civic Type-R. Hertner waited until the latter stages of practice to head out onto track, a strategy which paid off with the fifth quickest time.

The second free practice session is scheduled to take place later on today at 18:20 CEST.