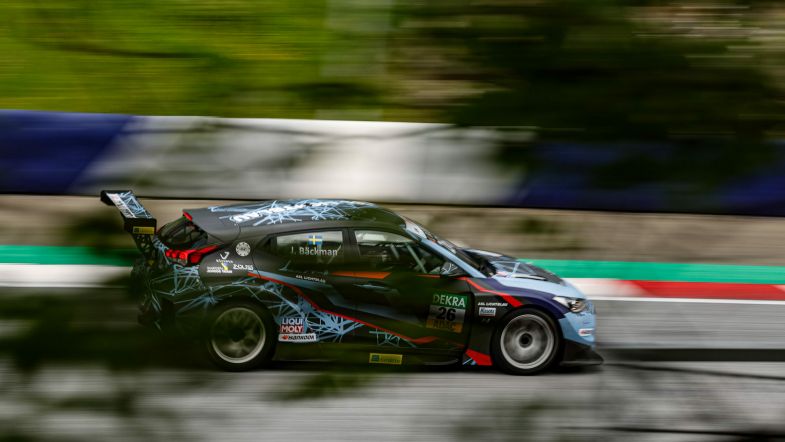 Bäckman was adjudged to have crept just before the lights went off at the start, but managed to pull enough of a margin over Team Engstler’s Szymon Ladniak to take the victory.

Team Engstler’s Martin Andersen claimed the final step on the podium, after coming out on top in a frenetic late-race battle with Bäckman’s team-mate Robin Jahr.

Having inherited pole position following Jonas Karklys’ engine change forced the NordPass Hyundai driver to the grid, Bäckman made a superb getaway off the line to lead Ladniak and Robin Jahr into the first corner.

Almost immediately, however, Bäckman was under investigation for a jump-start by the race stewards and was handed a five-second time penalty as a result.

This gave Ladniak the de facto lead of the race, with the Team Engstler Honda Civic Type-R driver just eight-tenths of a second adrift of the Hyundai Veloster at the end of lap two.

From the back, Karklys made a strong start and before long, was on the tail of Andersen in fifth place, with Patrick Sing in close company behind.

Knowing that she needed to make a gap between herself and Ladniak behind, Bäckman began to push and opened up a margin of 1.215s over the Honda.

Her cause appeared to be helped courtest of team-mate Jahr who began to pressurise the back of Ladniak approaching half-distance.

The Veloster jinked to each side of the Honda in front but couldn’t find a way past as Ladniak’s defence proved strong.

This allowed Bäckman’s lead over Ladniak to grow to just over two seconds.

Further back, Karklys and Andersen went toe-to-toe in their battle for fourth. The Hyundai made an assertive lunge down the inside of turn three but Andersen cut back on exit to reclaim the position.

The pair went side-by-side around turns four and five, but Andersen held on firm.

Andersen then caught up onto the back of Jahr in front, making the scrap for thr final step on the podium a three-way affair, with a rejuvenated Karklys close behind.

Meanwhile, Bäckman’s efforts in the lead got her over the five-second margin out front, having set the fastest lap of the race.

It ballooned to over seven seconds by the finish as Ladniak settled for second.

The podium battle almost came to a head on the final lap, as Jahr went wide at Turn 1 which allowed Andersen to move alongside, albeit off the track.

Jahr was then pushed wide at the next corner, enabling Sing to jump past Jahr and Karklys to fourth. Andersen was investigated for gaining an advantage off track but got away with a black and white warning flag instead of any substantial time penalty.

Sing was fourth at the finish, ahead of Karklys and Jahr, with Max Gruhn a solid seventh in his Audi RS 3 LMS TCR.

René Kircher was eighth, with Roland Hertner and Kai Rosowski rounding out the top 10.

Race 2 at the Red Bull Ring is scheduled to take place tomorrow at 15:35 CEST.