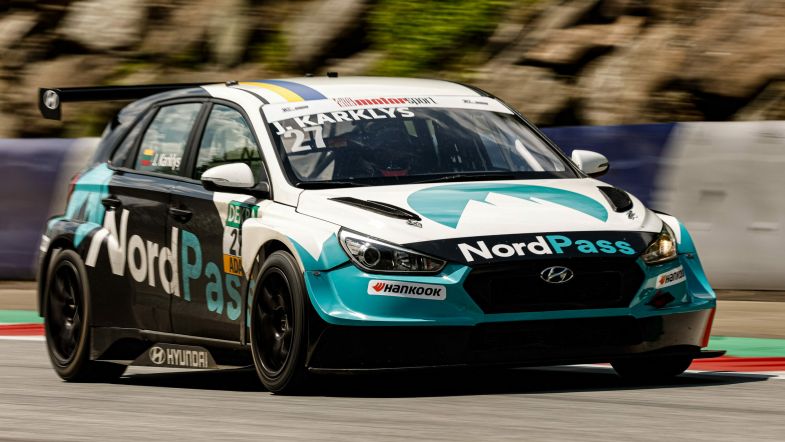 Karklys, driving a Hyundai i30 N TCR, posted a best time of 1:36.947 in the latter stages of qualifying, edging out ROJA Motorsport’s Jessica Bäckman by a fraction over a tenth of a second.

FP1 pacesetter Szymon Ladniak was third quickest in what proved to be a hotly contested 25-minute session to determine the grid for race one later on today.

The benchmark was set early in the session by the Hyundai Veloster N TCR of Bäckman, whose time of 1:38.176 was some seven-tenths of a second quicker than the Audi of Max Gruhn, with the privateer Hyundai i30 N TCR of Patrick Sing third quickest.

After showing promising speed in free practice, Vincent Radermecker took his Holden Astra TCR to the second quickest time. Behind, Ladniak was third fastest before immediately being beaten by the second ROJA Veloster of Robin Jahr.

Such was the pace of Bäckman, the Swedish driver then improved her best time to move three-tenths further ahead of Ladniak, who also made gains towards the top of the standings before again being usurped by Radermecker.

Points leader Martin Andersen (Team Engstler Honda Civic Type-R) had a quiet start to the session, opting to let other cars put rubber onto the track rather than set a representative lap-time.

This strategy paid off for the Danish driver as he went fourth quickest on his first proper attempt, before improving to second behind Bäckman.

Meanwhile, Karklys was somewhat out of the equation before the cars made it back to the pits ahead of the final runs; the Lithuanian driver was sixth fastest but made the closing minutes count as he set the fastest time of 1:36.947, nearly half a second quicker than Bäckman.

The improvements then came thick and fast, as Jahr went second before the first of Bäckman’s final attempts.

Bäckman had set the fastest middle sector to reduce the deficit to just under two-tenths of a second, while her final effort was just over a tenth down on Karklys.

Ladniak’s last lap was enough for third, ahead of Andersen, who pushed Jahr down to fifth at the flag.

Radermecker will start Race 1 from sixth on the grid, with Gruhn seventh.

The pair were comfortable ahead of Sing’s Hyundai, who outpaced the Team Engstler Honda of Roland Hertner and Kai Rosowski’s Audi.