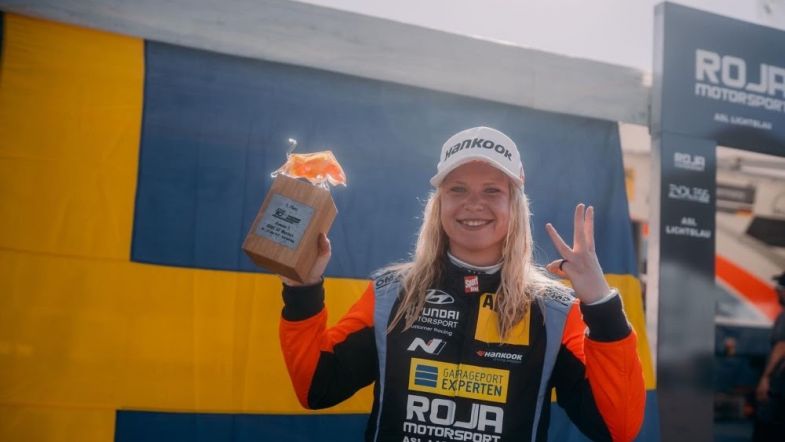 Jessica Bäckman: “I was in shock when I heard that I won”

“The weekend was pretty much perfect; I still have a hard time digesting that I won two out of two races this weekend. Unbelievable, especially considering that Red Bull Ring has never been my favorite track,” said Bäckman.

The ROJA Motorsport driver was hit with a five-second penalty for jumping the start in the first race and fought hard to build a big enough gap.

“I made it a little too exciting on Saturday, I was very focused on making a good start but then it became a little too good,” said Bäckman.

“Then I had to do everything in my power to try to pull away, but not easy on a track like Red Bull Ring where both brakes and tires take a beating early, so when I then heard on the radio that I won I was in shock, such an amazing feeling.”

The Hyundai Veloster N TCR driver made her way from fourth on the grid to third in the second race when the leading duo of Szymon Ladniak and Martin Andersen collided, handing the Swede the lead.

Bäckman has climbed to second overall in the standings, just one point behind leading driver Andersen.

“Race 2 on Sunday was tough to say the least, it was warmer in the air and warmer on the track and I had early problems with the brakes that got overheated, so I had to cool them on the straights,” said Bäckman.

“I did everything in my power to get past my competitors, and understood that the last laps would be crucial, which they were. To be able to cross the finish line as a winner second race in a row just felt amazing. In addition, a perfect weekend for the whole team, as we are now in the championship lead in the team championship.”