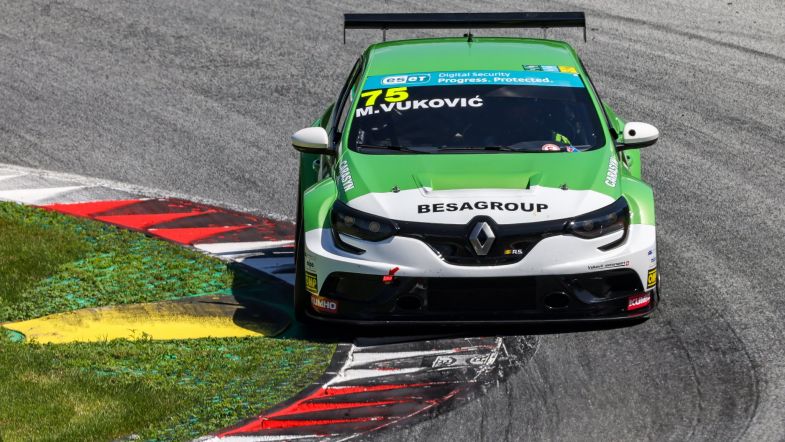 With the results of Race 1 determining the starting grid for Race 2, Radim Adámek started from the reverse grid pole-position in his Audi R S3 LMS TCR, ahead of Vít Smejkal in a Cupra.

Tomasz Rzepecki in a Volkswagen Golf GTI TCR started from third place, ahead of the Alfa Romeo driver Levente Losonczy.

Adámek maintained the lead into Turn 1, but lost first place in Turn 3 to Rzepecki.

Yesterday’s debutant winner, Sing got up to third early on after starting from ninth place.

Race 1 pole sitter Vuković, who started at the back of the grid, charged up to claim the lead by the end lap two behind the wheel of his Renault Megané RS TCR.

Rzepecki lost second place to Sing on lap three, and then third to Václav Janík a couple of corners later.

The only Volkswagen driver on the grid, Rzepecki, had his rear-view mirrors full of Bartosz Groszek’s Audi on lap six, with the championship leader claiming fifth place from Rzepecki through Turn 3 on lap six.

Behind them, Žarko Knego hit Sebastian Steibel, resulting in a broken front left suspension and retirement for Knego.

A similar incident happened to Adámek who was hit by Carol Wittke, with both drivers retiring from the race.

This brought out the safety car until lap ten.

Vuković controlled the restart, with Semerád putting pressure on Sing for second place, and overtook him going into Turn 3.

Losonczy beached his Alfa Romeo Giulietta TCR at Turn 3 and retired with just one lap to go.

The German driver was however penalised, however, with five seconds added to his time for exceeding track limits. That downgraded Sing to fifth position, with third place instead taken by Janík and fourth Groszek.

Tomasz Rzepecki and Milovan Vesnić rounded off the top six.

The next TCR Eastern Europe race takes place at Poznaň on June 24-26.