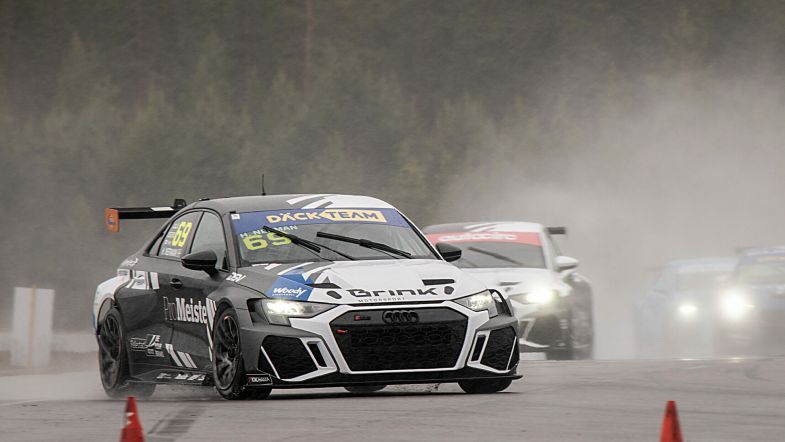 Hugo Nerman makes it two out of two wins at Skellefteå

Hugo Nerman has made it two out of two wins in the STCC TCR Scandinavia weekend at Skellefteå, taking advantage of a chaotic first part of the very wet race.

MA:GP driver Mattias Andersson started from pole behind the safety car due to the wet conditions.

The safety car was called out after the first lap, just as in the first race, as Calle Bergman was turned around by points leader Robert Dahlgren.

Tobias Brink and Dennis Strandberg made two separate mistakes, going off at the same corner where Bergman was left stranded after his incident with Dahlgren.

Volkswagen driver Strandberg stopped during the safety car period due a technical issue and retired from the race.

Brink meanwhile visited the pits twice during the period to clear debris from his radiators and rear wheels.

The race resumed with just four laps left and the action kicked off once again as race leader Andersson was tapped into a half-spin by Lestrup Racing Team driver Andreas Bäckman going into Turn 1.

Andersson dropped down to fourth position while Cupra driver Axel Bengtsson took advantage of the chaos to take the lead.

Bengtsson was not able to keep the lead for long as Brink Motorsport driver Nerman made the most of a mistake from the Cupra driver to take the lead.

A furious Andersson was on the move after the restart incident and soon made his way past Söderström for second place. The Lynk & Co driver gained on Nerman but could not close the gap towards the end of the race.

Nerman won the race by close to four seconds ahead of Andersson, with Söderström completing the podium.

Reigning champion fought his way up to finish fourth, passing team-mate Bengtsson on the last lap.

Brink charged back up after his mistake on the first lap to finish seventh ahead of Exion Racing driver Isac Aronsson who claimed the reversed grid pole for Race 3 by finishing eighth.