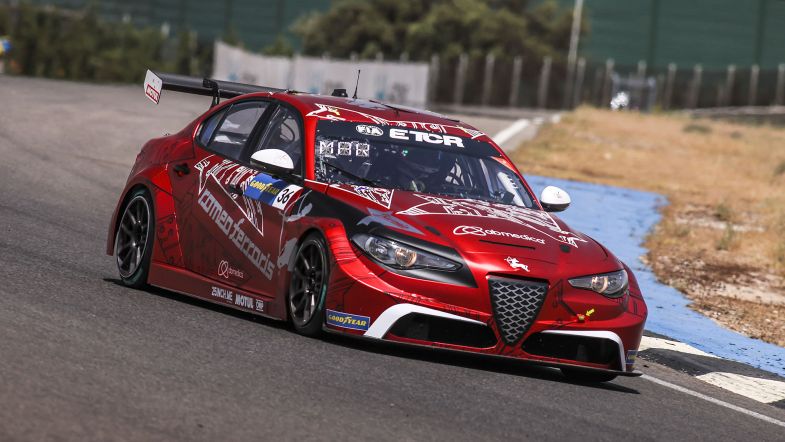 The Spaniard remained under the Briton’s rear bumper and overtook for second place at the last corner of the second lap.

Blomqvist hit Azcona’s back later on, with the Hyundai driver losing his rear bumper, but still managing to stay ahead and finish second behind Ekström.

“Car was good, I lost a bit at the beginning, but I recovered later. All in all, I’m very happy,” said the Swede after the race.

“That was a tough race for me, I tried my best all the time,” said Azcona after the race. “It’s a good result, congrats to Mattias.”

Romeo Ferraris’ Maxime Martin and Giovanni Venturini, and Hyundai’s Nicky Catsburg were up next for the second quarter final.

At the start Martin took the lead ahead of Venturini, who would soon lose out to Catsburg. The positions remained stable as the Dutch gradually closed the gap to the Belgian.

The Hyundai driver started the last lap right behind the Giulia ETCR, with Martin moving to the defensive line to keep Catsburg behind. But instead it was Venturini who took advantage of an error from Catsburg to overtake for second place.

Romeo Ferraris scored a 1-2 courtesy Martin and Venturini, with Catsburg in third place to complete the podium.

Ekström leads the Pool Furious after the quarter finals with 35 points, 11 ahead of Azcona and 13 over Blomqvist.

The FIA ETCR returns to the track on Sunday morning for the Pool Fast semi finals at 09:05 CEST.