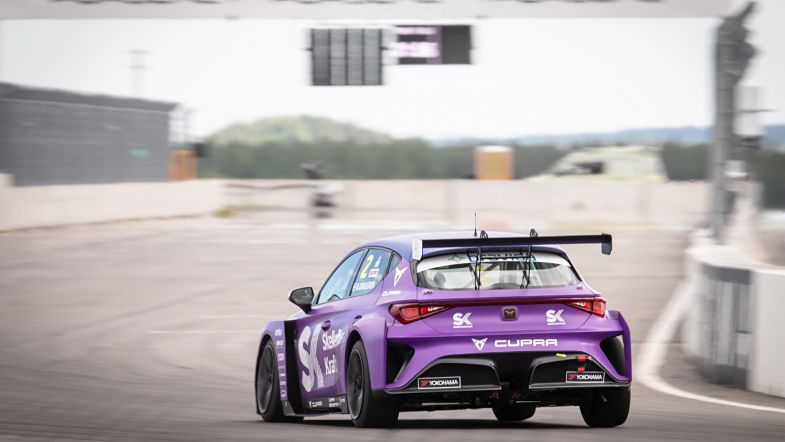 Robert Dahlgren turned around his nightmare qualifying of yesterday to victory in the first STCC TCR Scandinavia race at Skellefteå from sixth on the grid.

Hugo Nerman claimed the lead at the start of the race from second place on the grid and headed the field from lights to flag.

But the joy was short lived for the Brink Motorsport driver who was hit with a 20-second penalty for jumping the start, dropping him to finish sixth.

The safety car was called into action as five cars collided heading into the first corner.

Bengtsson and Skaar were able to continue with light body damage while the other drivers were forced to retire.

The safety car headed back in with five laps left of the race and Dahlgren, who had made a rocket start from sixth to third, immediately put pressure on Andreas Bäckman for second place and effectively the lead with Nerman’s pending penalty.

The Cupra driver made the move stick on lap four, immediately pulling up a gap.

Audi rivals Tobias Brink and Oliver Söderström had a tough fight for third place behind Bäckman.

Söderström pushed Brink wide and went past on lap four, only for the stewards instructing him to hand the position back.

One lap later, Brink made a mistake, allowing Söderström back past for third. Brink kept close to Söderström for the remainder of the race, but could not get past.

Dahlgren won the race four seconds ahead of the Lestrup Racing Team duo of Bäckman and Söderström. Brink was fourth, half a second behind Söderström.

Mattias Andersson had a lonely race to finish fifth ahead of the penalised Nerman.