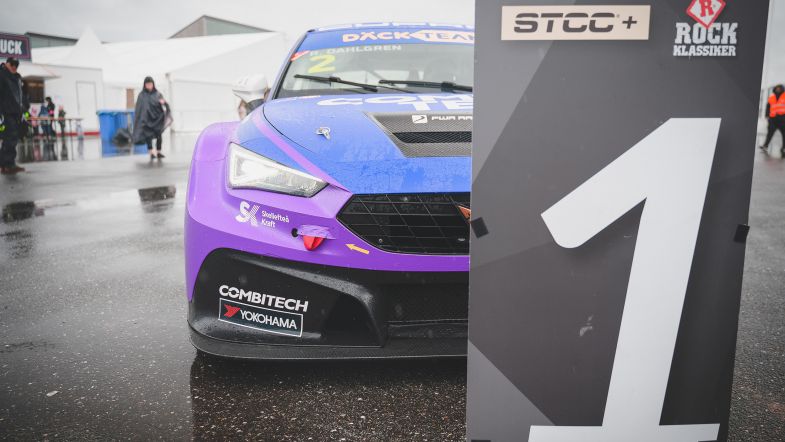 Robert Dahlgren won a wet and foggy last race of the STCC TCR Scandinavia weekend at Skellefteå ahead of Tobias Brink and Oliver Söderström.

The PWR Racing driver beat reversed grid pole sitter Isac Aronsson off the line to claim the lead into Turn 1.

MA:GP driver Mattias Andersson was hit from behind by Marius Solberg Hansen at the start, dropping from seventh to tenth place.

Disaster struck independent driver Dennis Strandberg who was forced to retire for a third consecutive race, with his Volkswagen experiencing further technical issues.

Exion Racing driver Aronsson, who started from pole, continued to drop down the order to finish in sixth position.

Lynk & Co driver Andersson made strong progress after his start incident, fighting his way back up to finish fourth.

Lestrup Racing Team driver Andreas Bäckman was right on the tail of Brink in the fight for second place until two laps from the end when he suffered a front left puncture.

Bäckman drove slowly around the circuit to finish the race, dropping from third to 12th. This promoted team-mate Söderström to claim the final podium position.

Solberg Hansen finished seventh for MSH Motorsport and has claimed the lead of the independents’ standings.

Race 1 and 2 winner Hugo Nerman climbed from eighth on the grid to finish fifth, dropping the points lead to Dahlgren who heads the standings by five points over Nerman and seven points over Söderström. Brink is fourth, a further 12 points adrift.

The next STCC TCR Scandinavia race takes place at Ring Knutstorp on July 22-23.