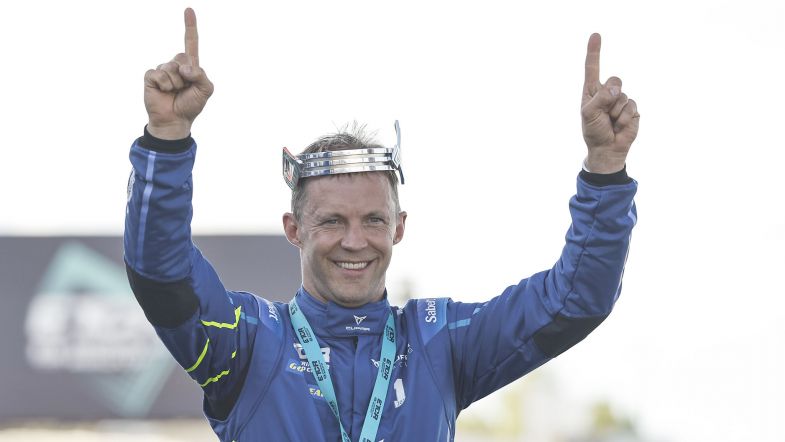 Despite dominating the Pool Furious the whole weekend, the Swede acknowledges that the challenge is getting more difficult every time.

“The feeling of winning never gets boring, also listening to the national anthem doesn’t get boring. It’s the third time now and I have to say that I enjoy it in the ETCR, so it’s a great feeling,” said Ekström to TouringCarTimes.

The Swede dominated the Pool Furious sessions throughout the three days at Jarama, despite being the first time running in this track with the e-Racer.

“It was a great weekend, I felt confident with the car from early now and, from where I stand now, I also felt that everybody was very close. We were very strong and that was the key to our success,” said Ekström.

The Cupra EKS team dominated the weekend, taking all the spots on the podium with Adrien Tambay and Jordi Gené in second and third place.

“Adrian was very strong, Jordi did an outstanding weekend so, all in all, for the team, for me, for Cupra, it was a great weekend and I’m very happy,” said Ekström.

Ekström leads the championship again and the Swede says he is expecting a tougher second half of the season.

“I know that it will be tough with Adrien and Mikel, I knew it from before, you could see that Maxime Martin also joined the battle and was on my bumper at the end of the race,” said Ekström.

“So I just know that every session, every time I go in the car I have to be spot on and on edge. Because now they are new to the championship, but on the second half of the season they are going to warm up and the challenge it’s going to get tougher.”

After the third round of the season, Ekström leads the drivers’ championship with 280 points, six ahead of Tambay and 77 over Hyundai’s Mikel Azcona.

In the manufacturers’ table, Cupra leads on 554 points, 172 ahead of Romeo Ferraris and 206 over Hyundai Motorsport N.