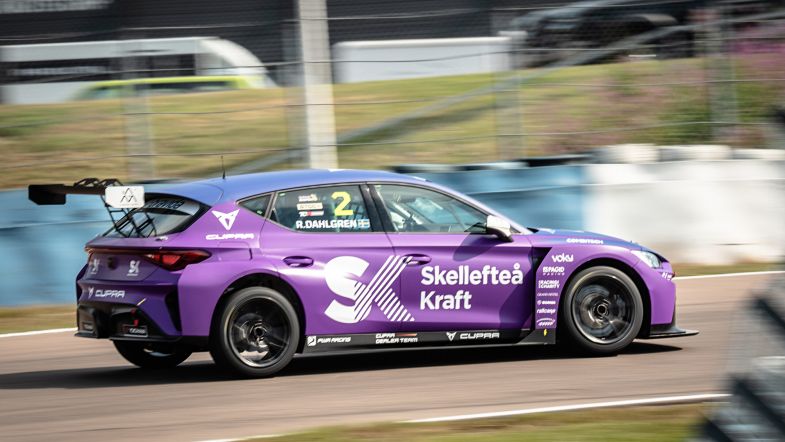 Robert Dahlgren enjoyed a solid start to race day at Knutstorp with a comfortable win in the opening STCC TCR Scandinavia race of the weekend.

Wet conditions greeted the field for the opening race and it was Andreas Bäckman who appeared to get the best initial launch when the lights went out for the start.

However, it was poleman Dahlgren who held on to lead the field into turn one for the first time, with Oliver Söderström managing to sneak ahead of Bäckman to take second.

Behind, Hugo Nerman was able to find away ahead of Axel Bengtsson to grab fourth, whilst Tobias Brink was lucky not to get collected when his Audi failed to get away when the lights went out – dropping him back down the order to twelfth.

Dalhgren quickly set about building a lead at the front with a series of quick laps allowing him to extend his advantage over Söderström, with team-mate Bengtsson at the heart of the early race battle as he fought to keep Mattias Andersson’s Lynk & Co at bay.

When Bengtsson ran slightly deep on lap four and left the door open, Andersson was able to sweep through into fifth spot and then set off after Nerman.

The pair would make light contact on lap six when Andersson tried to sneak up the inside and there was a further touch a lap later which saw both drivers run wide and allowed Bengtsson to pass the pair.

By the end of the lap however, Andersson had passed the Cupra for a second time to move up into fourth spot, with Bengtsson left to try and fend off the advances of Nerman’s Audi.

Dahlgren’s advantage at the front had been extended to more than four seconds when the safety car was deployed on lap ten to allow Calle Bergan’s Exion Racing Audi to be recovered from the side of the circuit.

The action resumed on lap eleven and immediately there were problems for Nerman as he ran wide into turn one and dropped down outside the top ten, whilst Andersson fought his way ahead of Bäckman to move into the podium positions.

Out front however, Dahlgren was untroubled as he extended his championship lead with victory ahead of Söderström, with Andersson easing away from Bäckman to wrap up third after a fine run through from seventh on the grid.

Bengtsson took fifth with the Volkswagen of Marius Solberg Hansen rounding out the top six.

Brink would recover from his tough start to seventh ahead of Isac Aronsson, with a recovering Nerman and Dennis Strandberg rounding out the top ten.

Bergman was the only one of the 15 starters not to make it to the finish.

The second race of the weekend starts at 14:05 CEST.