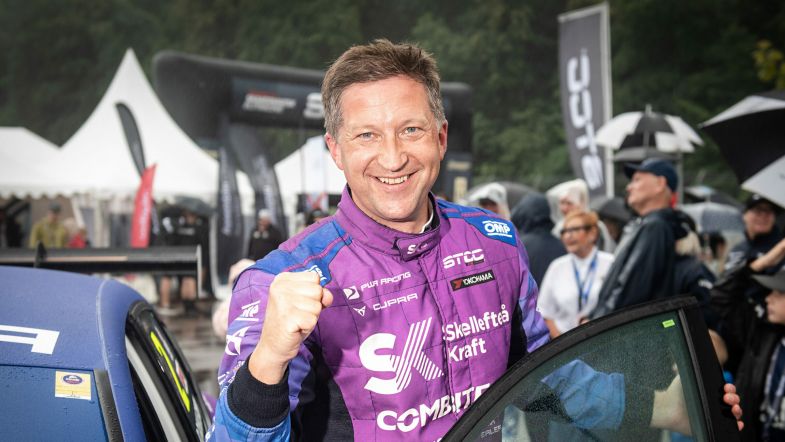 Robert Dahlgren took full advantage of drama for winner-elect Andreas Bäckman to wrap up a hat-trick of victories in the latest rounds of the STCC TCR Scandinavia season at Knutstorp.

Isac Aronsson had lined up on pole for the start of the race ahead of Mattias Andersson and it was the Audi that held the lead, with Andersson losing spots on the outside line as both Marius Solberg Hansen and Bäckman got ahead at turn one.

Tobias Brink and Dahlgren quickly followed suit as they also cleared the Lynk & Co, whilst further back, Oliver Söderström lost ground as he was slow away from the line and got swallowed up by the pack behind.

Brink then lost ground when he ran off track mid-way through lap one – with Calle Bergman also going across the grass at the same point.

Aronsson led the early stages of the race from Bäckman, with Dahlgren battling Aronsson for third and grabbing the spot on the second lap.

With Dahlgren looking to close in, Bäckman pushed to get ahead of Aronsson for the lead and made a move down the inside on lap three to ease ahead – only for his rival to fight back on the run across the line to start lap four.

Bäckman had the inside line for turn one however and was able to make the move stick, and then set about building a lead as Aronsson fought to keep Dahlgren at bay.

A fine move around the outside on lap five allowed Dahlgren to move into second spot ahead of Aronsson, with Handsen holding fourth and Andersson looking to work his way back up the order in fifth.

Andersson made his move on Hansen on lap seven, with the pair running side by side for a number of corners before the Lynk & Co completed the move to go into fourth and he quickly closed onto the rear of Aronsson’s Audi – with Bäckman and Dahlgren clear up the road.

Andersson’s bid to take third on lap nine saw him move into the podium positions but the move resulted in Aronsson being run off track – dropping him into the pack of cars behind.

Contact later in the late with Hugo Nerman would then see Aronsson sustain damage that resulted in being forced into retirement.

Bäckman seemed to be comfortable at the front and heading for victory but his Audi suddenly slowed on track – allowing Dahlgren, Andersson and Hansen to move ahead before the RS 3 LMS burst back into life.

Once at the front, Dahlgren was unchallenged as he made it three wins from three in the PWR Racing Cupra ahead of Andersson, with Bäckman nipping ahead of Hansen on the penultimate lap when the VW driver had a lurid sideways moment.

However, Andersson had been handed a time penalty for the contact with Aronsson, which dropped him from second down to fifth spot – moving Bäckman up to second and Hansen onto the podium, with Axel Bengtsson claiming fourth.

Söderström fought his way through to sixth ahead of a recovering Brink, who came out on top of a late battle with Nerman to finish seventh.

Didrik Esbjug and Dennis Strandberg rounded out the top ten.

Dahlgren has pulled clear in the standings to head Söderström by 31 points and Brink by 40. The next STCC race takes place at Gelleråsen Arena on August 19-20.