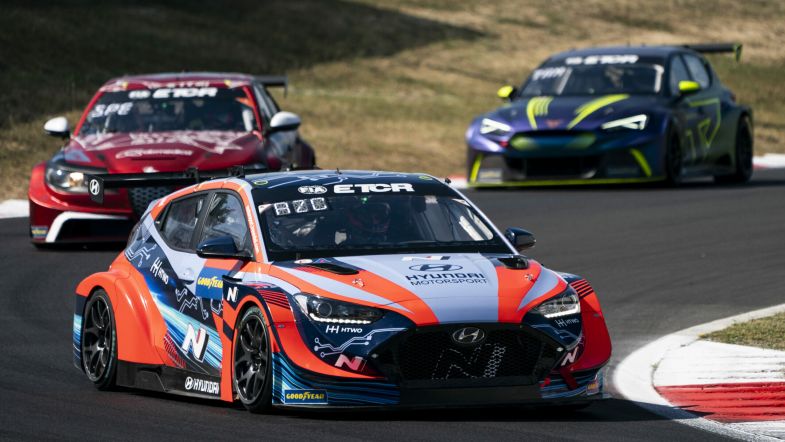 The three other cars taking part in the race all hit tyre problems, with Bruno Spengler heavily damaging his Romeo Ferraris-built Giulia as he crashed into the Turn 2 barriers.

At the start there was contact between Spengler and Azcona, as well as between Cupra’s Tambay and Hyundai’s Norbert Michelisz.

Spengler was in second position ahead of Michelisz after the first lap, while Jordi Gené pulled off a strong overtake on a struggling Luca Filippi to take fifth.

Spengler then went off at the high-speed Turn 2 on the third lap, escaping the crash unharmed while his car sustained heavy damage. This puts doubts over Maxime Martin’s participation in the Pool Furious final.

On lap five, a tyre issue struck Michelisz, forcing the Hungarian to cut Turn 4 and limp to the flag. The final lap then saw Luca Filippi suffering a rear left tyre failure.

Azcona took a commanding win for Hyundai, while the two Cupra drivers Tambay and Gené appeared to hold position once all of their opponents were out to finish second and third. Filippi is classified in fourth ahead of Michelisz.