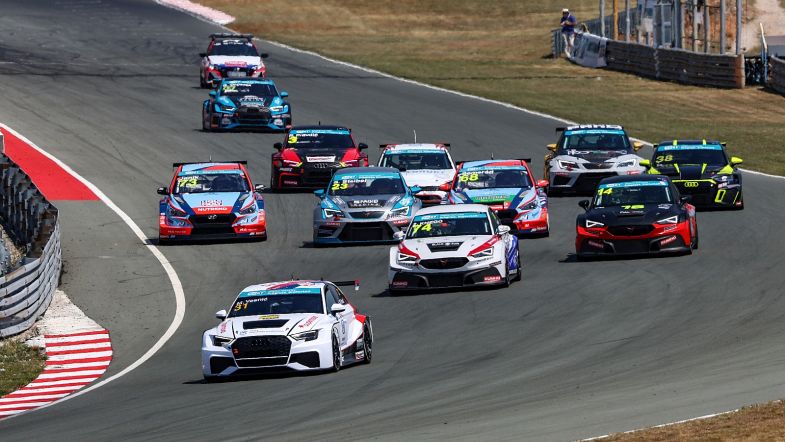 Milovan Vesnić wins on his return to TCR Eastern Europe

Former champion Milovan Vesnić secured victory in the first TCR Eastern Europe race of the weekend at Grobnik after Bartosz Groszek stalled from pole-position, with the second planned race then being called off after Sunday’s track action was cancelled.

Championship leader Groszek started race one of the Croatian round from pole position, ahead of fellow Audi driver Vesnić. The Hyundai i30N TCR of Groszek’s only title competitor, Petr Semerád, occupied the third starting grid box, ahead of home racer Žarko Knego in a Cupra Leon Competitión TCR.

Third placed in the championship, Milenko Vuković, didn’t travel to Grobnik this weekend.

Groszek stalled at the start and fell to the back of the grid, with Vesnić and Knego inheriting first and second, and Petr Čížek passing Semerád to get to third place. After one lap, Groszek got up eighth place.

At the end of the second lap, Semerád passed Čížek for third, and Groszek passed the Golf TCR of Tomasz Rzepecki and the Hyundai i30N of Václav Janík to get to sixth place.

The third lap saw Groszek up to fifth, and during lap four, he was alraedy at the back of Čížek. The championship leader passed the Fullin Academy racer on lap six, and went after Semerád who was two seconds ahead and was passing Žarko Knego into turn one at the start of lap seven.

Rzepecki retired at the end of lap six and home racer Knego lost two more positions, from Groszek and Čížek, but then fell back to seventh, with a mechanical problem. Groszek did not waste time, and overtook the Hyundai of Petr Semerád at the start of lap ten to get to second place, with Vesnić being more than four seconds ahead in first.

With temperatures reaching over 37 degrees, and having passed the entire grid, Groszek closed in on Vesnić. In the end, Polish racer could not find a gap to pass the Serbian racer, who won, with Petr Semerád in third.

Race two had been due to take place on Sunday but an incident in a GT race on Saturday resulted in one of the volunteer marshals losing his life, with the decision taken to bring the meeting to an early end.

Groszek extended his championship lead, and now has 129 points, ahead of Semerád, with 116 points to his name, while Petr Čížek moved up to third in the championship with 78 points.

The next round of the TCR Eastern European championship is scheduled for August 20-21, at Slovakia Ring.