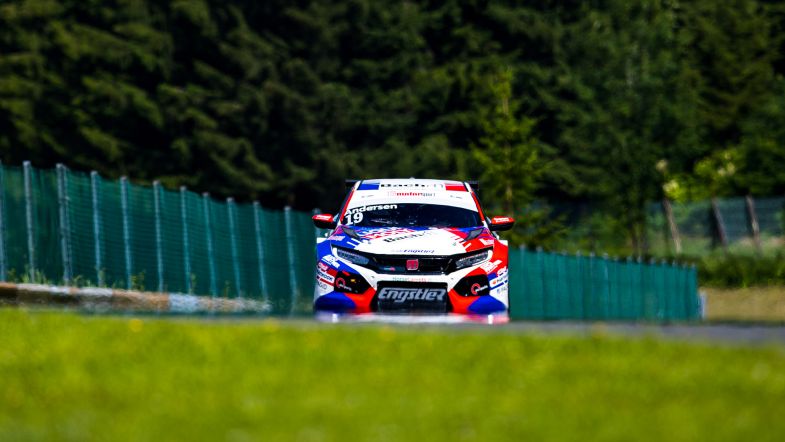 Team Engstler driver Martin Andersen achieved a lights-to-flag win in the opening TCR Germany race at the Nürburgring, although it was far from easy for the German driver as he had to fend off NordPass’ Jonas Karklys until the chequered flag.

Positions remained stable, but Kircher had to come into the pits after six laps for a change after a tyre issue, returning to the track but falling to the back of the field.

Bäckman found her pace, putting some distance to her competitors and closing the gap to Ladniak, coming under the Honda’s rear bumper on lap eight.

The Swede came under investigation after nudging Ladniak at the last corner on lap eleven, with the Team Engstler driving losing third place.

At the front, Karklys closed the gap to Andersen, coming within half a second of the leader with still eight minutes to go on the clock. The Nordpass driver was quicker, looking to overtake Andersen on the outside at Turn 1 on laps 15 and 16.

Bäckman made contact with the leading duo with just one minute to go, but went wide on the penultimate lap.

Team Engstler’s Roland Hertner and Max Gruhn collided on the penultimate lap, with Hertner spinning off the track but able to recover on his own power.

Andersen fended off Karklys until the chequered flag, with Bäckman completing the podium in third place.

Ladniak was fourth, ahead of Sing and Vincent Radermecker, with the Holden Astra. Butti finished in seventh place, followed by Robin Jahr and Kai Rosowski. Hertner completed the top ten.

The result allows Andersen to extend his lead in the championship with 199 points, 22 over Bäckman and 41 ahead of Ladniak.

The TCR Germany field returns to the track on Sunday morning at 8:05 CEST for the qualifying session for Race 2