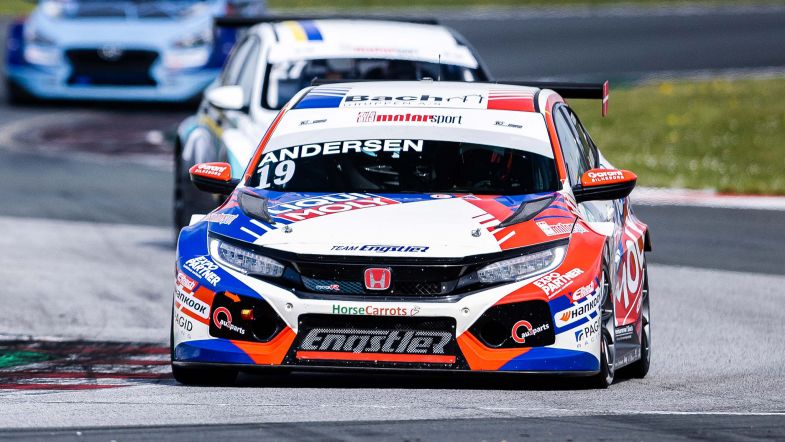 Andersen was slow of the blocks at the start, with Jessica Bäckman (Hyundai Veloster N TCR) taking the lead ahead of the Team Engstler driver and her team-mate René Kircher (Hyundai i30 N TCR).

Andersen overtook Bäckman for the lead on lap two.

Marco Butti, driving an Audi RS 3 LMS, was on a recovery drive, climbing up to third place, as Kircher also overtook Ladniak again.

Butti soon made contact with Bäckman, attacking for second place and bringing Kircher with him, as Andersen opened a gap at the front. The Audi driver overtook for second place at Turn 1 on lap five, but went wide, dropping to 12th place. The Italian would later retire to the pits.

Ladniak also retired to the pits on lap eight.

Andersen won at the chequered flag, with Bäckman and Kircher completing the podium. Karklys Jonas, driving a Hyundai i30 N TCR, was fourth, ahead of Sing and Vincent Radermecker, driving a Holden Astra TCR, who recovered from 11th on the grid to sixth in the race.

Robin Jahr finished seventh, ahead of Roland Hertner who completed the top eight.

After the races at Nürburgring, Andersen leads the championship with 234 points, 29 ahead of Bäckman and 72 over Ladniak.

The next round of the TCR Germany takes place at the Lausitzring, on the 19-21st of August.