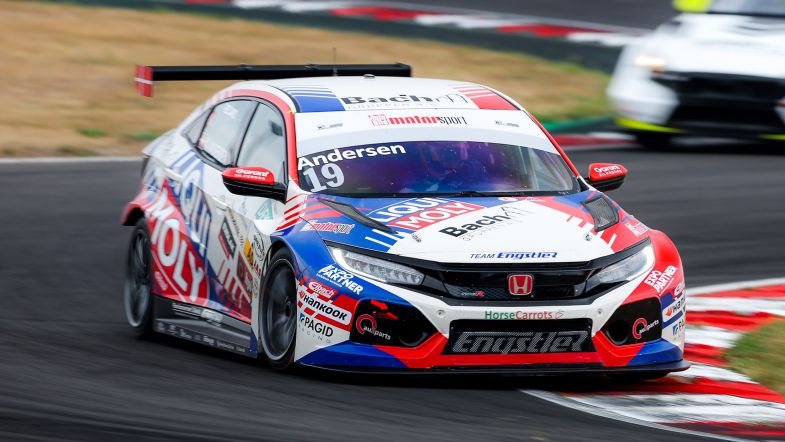 Team Engstler driver Martin Andersen claimed an easy victory in the second TCR Germany race at the Lausitzring, with the Danish driver taking another step towards securing the 2022 crown, as main rival Jessica Bäckman could only manage eighth position.

Andersen gradually opened a gap at the front as the positions remained stable during the race.

Bäckman closed the gap to Karklys with eight minutes to go, attacking the NordPass driver for third place as her team-mate Robin Jahr joined the duo from behind.

Further behind, Vincent Radermecker attacked ROJA Motorsport’s René Kircher (Hyundai i30 N TCR) at Turn 1 on lap 19, with both colliding. But Kircher managed to stay on track and ahead of Radermecker.

Karklys not only fended off Bäckman’s attacks, but also closed the gap to Ladniak, coming side-by-side with the Honda driver on lap 20.

Ladniak defended, with Karklys going wide and Bäckman challenging for the overtake at the main straight. But her team-mate Jahr also saw a gap, taking the inside at Turn 1, seeing both ROJA Motorsport drivers colliding. Bäckman dropped down to eighth and was able to continue while Jahr was out of the race.

Andersen claimed yet another victory at the Lausitzring, with Ladniak and Karklys completing the podium.

After the races at the Lausitzring, Andersen has extended his lead in the championship, with 302 points, 71 ahead of Bäckman and 88 over Ladniak.

Andersen would only have to score one point in the next and penultimate round of the season to clinch the title.

The next round of the TCR Germany takes place at Sachsenring on the 23-25th of September.