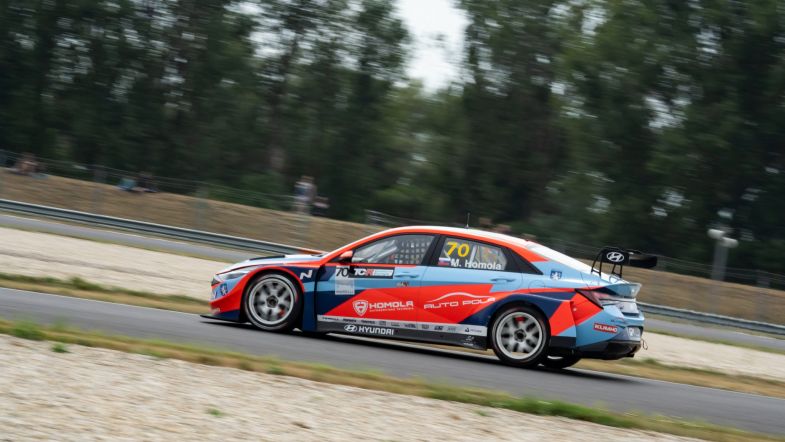 Local racer Mat’o Homola started the second TCR Eastern Europe race at Slovakia Ring in tenth place and worked his way through the field to win by more than nine seconds over his team-mate Petr Semerád and Bartosz Groszek.

Radim Adámek didn’t start the race due to a technical issue, which meant there were only twelve cars lined up on the starting grid.

Pravdič got a slow start and fell down to eleventh place, opening the door for Adam Rzepecki who moved into the lead.

Václav Janík utilized fourth starting position to go into second, while the local hero Homola got all the way up to third place.

Championship contenders Groszek and Semerád were racing in fourth and fifth positions respectively ahead of Žarko Knego, who also lost out on the start.

The second lap saw Homola passing Rzepecki’s Audi, while Semerád got ahead of Groszek after running side-by-side throughout most of the lap. Semerád then passed Rzepecki into the first corner to make it all-Janík Motorsport top three.

After losing third position to Semerád, Adam Rzepecki went off-circuit into the gravel, but managed to get back to the tarmac, dropping to ninth position.

Groszek got to the back of Janík at the end of lap nine and passed him, and Petr Čížek also used this opportunity to overtake Janík.

Čížek was then all over the back of Groszek’s Audi, but overdrove the car, clipped the grass and lost control. He managed to get back on the circuit but fell back to fifth.

That resulted in a three-way fight between Čížek, Janík and Levente Losonczy for fourth place. After a couple of contacts and three-wide racing, it was Čížek who got to the chequered flag in fourth, ahead of Janík and Losonczy.

Homola scored his second win this weekend ahead of his team-mate Petr Semerád, while Groszek managed to salvage some more points for his title challenge in third.

The Polish racer is still the leader of the championship with 156 points, while Semerád has 154. Čížek remains in third, with 105 points.

The final round of the TCR Eastern Europe championship will be held at Circuit Most in Czech Republic on September 2-4th.